As Autumn starts rolling in, planning an outing gets a bit trickier. It's still warm enough for a swim while the cloudy weather suggests that a walk or hike would be a more appropriate activity. Thankfully, Malta has a number of places that offer an opportunity for both, most prominently Selmun – a peninsula on the eastern side of Mellieha.

This area is known for the historical relics which can be found along the pleasurable trekking paths that lead to some of the most stunning swimming spots in the north of Malta.

Here we will share which routes you can take, what you'll find, and more reasons why Selmun serves as the ideal in-between solution for all you outdoor lovers.

Our journey begins at Selmun Palace, a spectacular Baroque structure dating back to the late 18th century when Malta was under the reign of the Order of St John. It was built on a plan by renowned architect Domenico Cachia and funded by a charity that Grand Master Alof de Wignacourt set up – the Monte della Redenzione degli Schiavi. 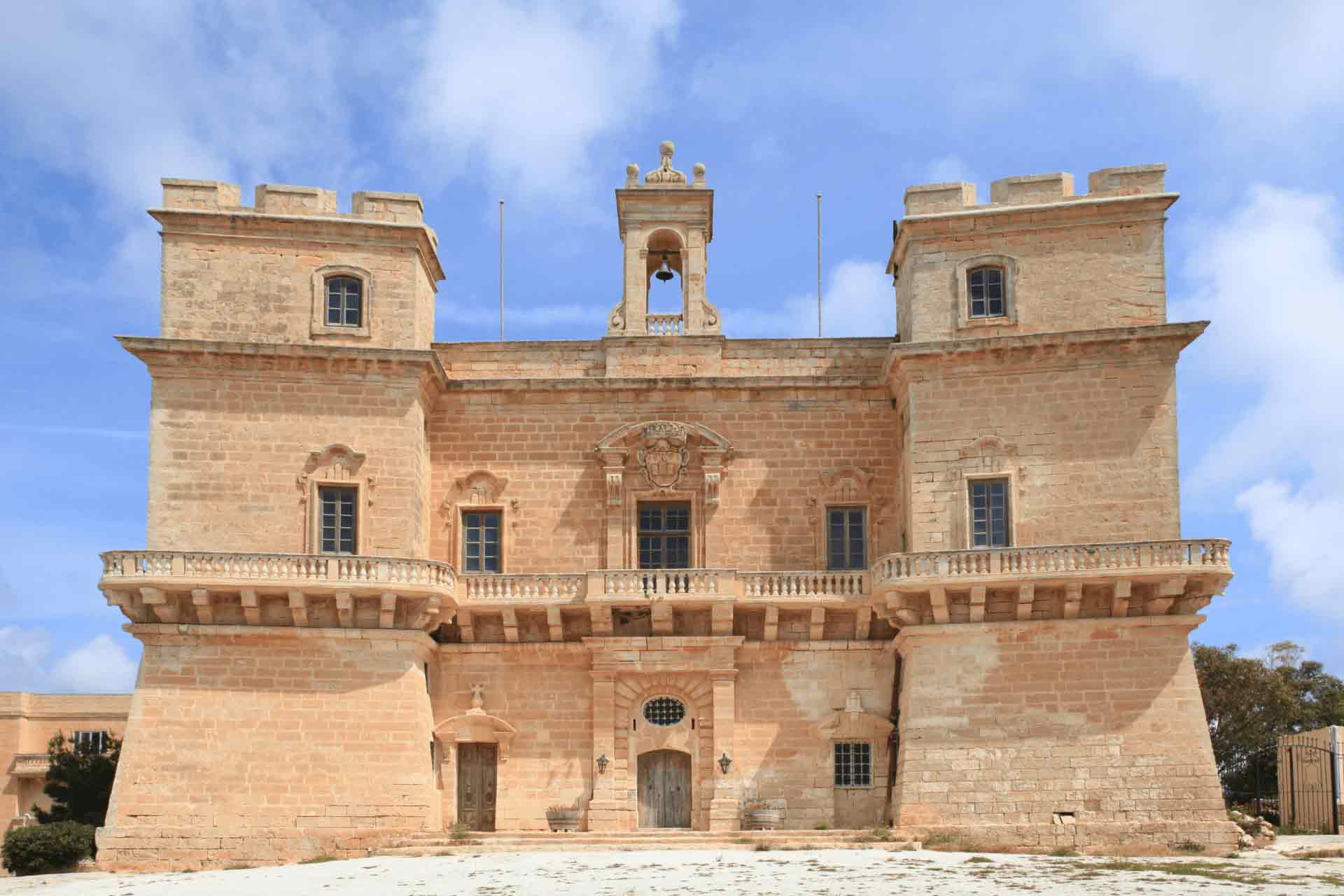 As its name implies, the charity's goal was to finance the redemption of any Maltese Christians enslaved by Ottomans or Barbary corsairs. While Selmun Palace was built and equipped like a military coastal tower, it was never intended for military use – it was set up there to intimidate any attackers from the sea. For the most part, the palace served as a summer residence that the Knights could rent out to get some downtime and hunt rabbits around the vast estate, funding the redemption fund in the process. However, it did play a crucial role in Malta's rebellion against the French at the end of the century, becoming the first palace in Malta to be used as a naval hospital. 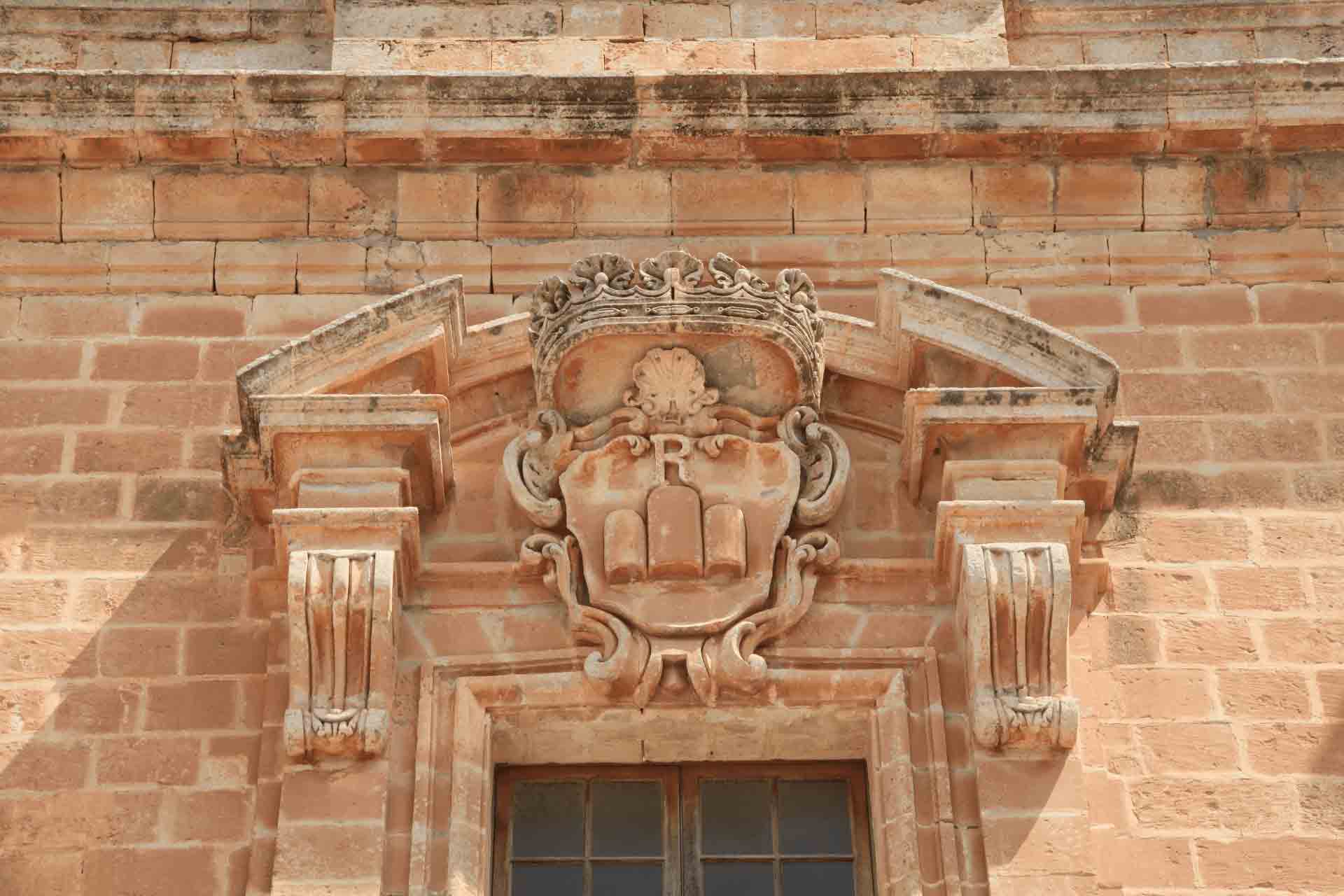 Now that the first history lesson's over, we can start to explore the marvellous scenery surrounding the palace. There are three potential roads which offer equally beautiful walks for trekkers or hikers and gorgeous beaches for sea lovers to dive into. The only difference is the duration of the walk so it really depends on your preference, or how many steps you want to rack up that day. 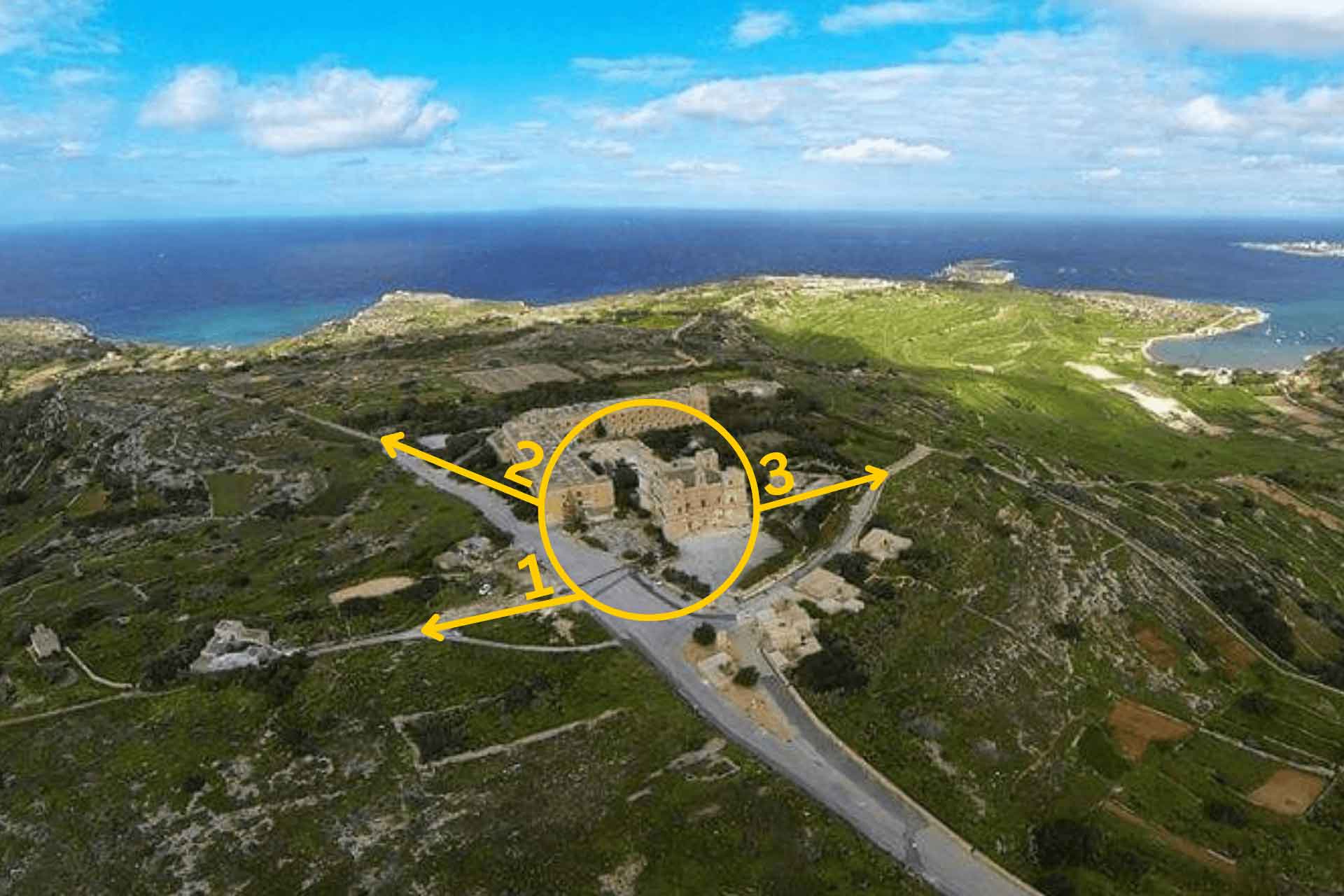 Here, let us help you choose.

To the left of Selmun Palace, there is a short narrow footpath at the end of which you will find a road that leads to Imgiebah Beach. Once you've reached the road you can turn on your right and start your journey. 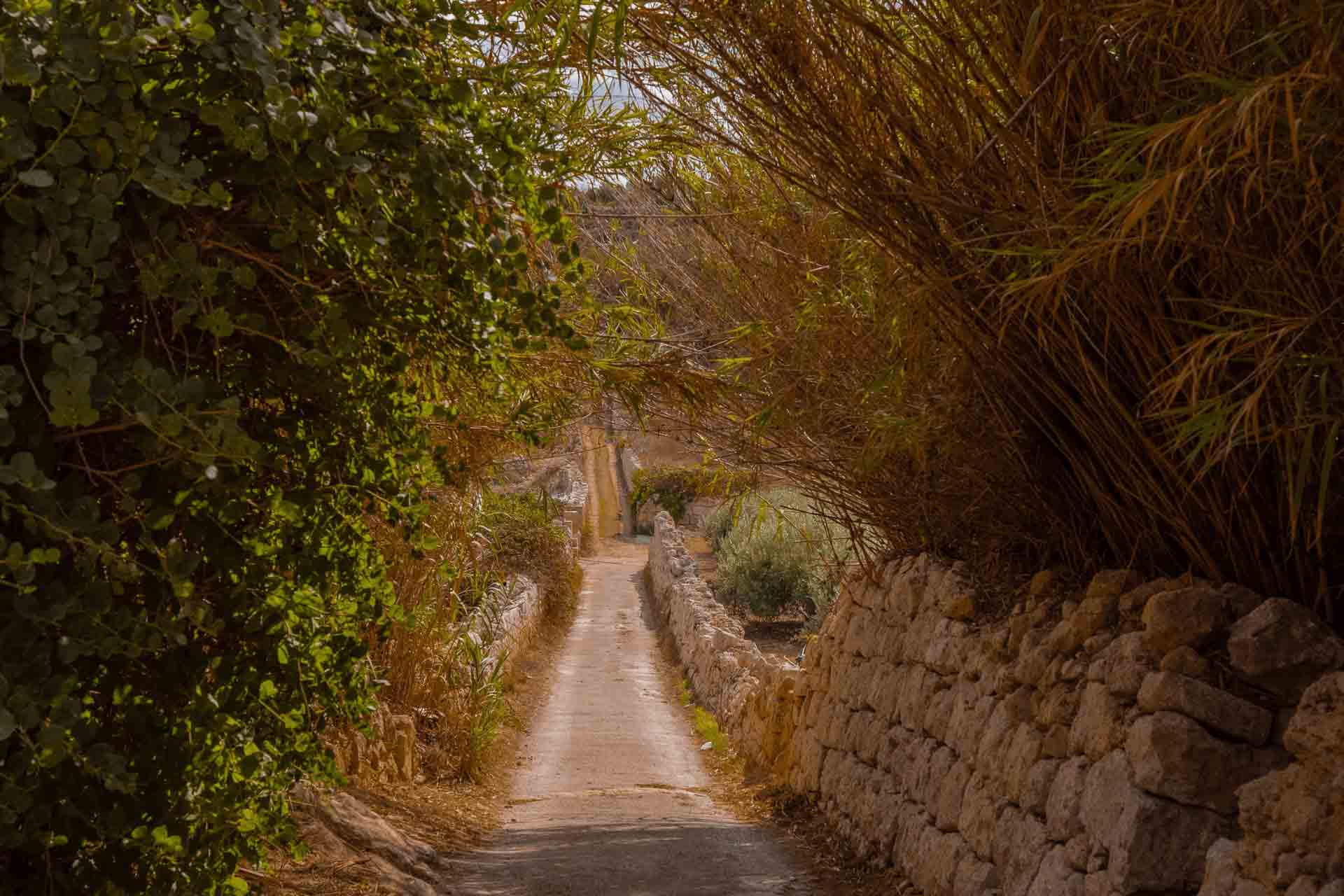 The path towards Imgiebah Beach

The walk is pretty straightforward from here. You just keep walking straight along the road and enjoy the varied flora that Malta has to offer, as pine trees and bamboo tower overhead, offering you shelter from the sun. There are multiple spots along the way where you can stop for a breather and take in the beautiful terraced fields surrounding you. 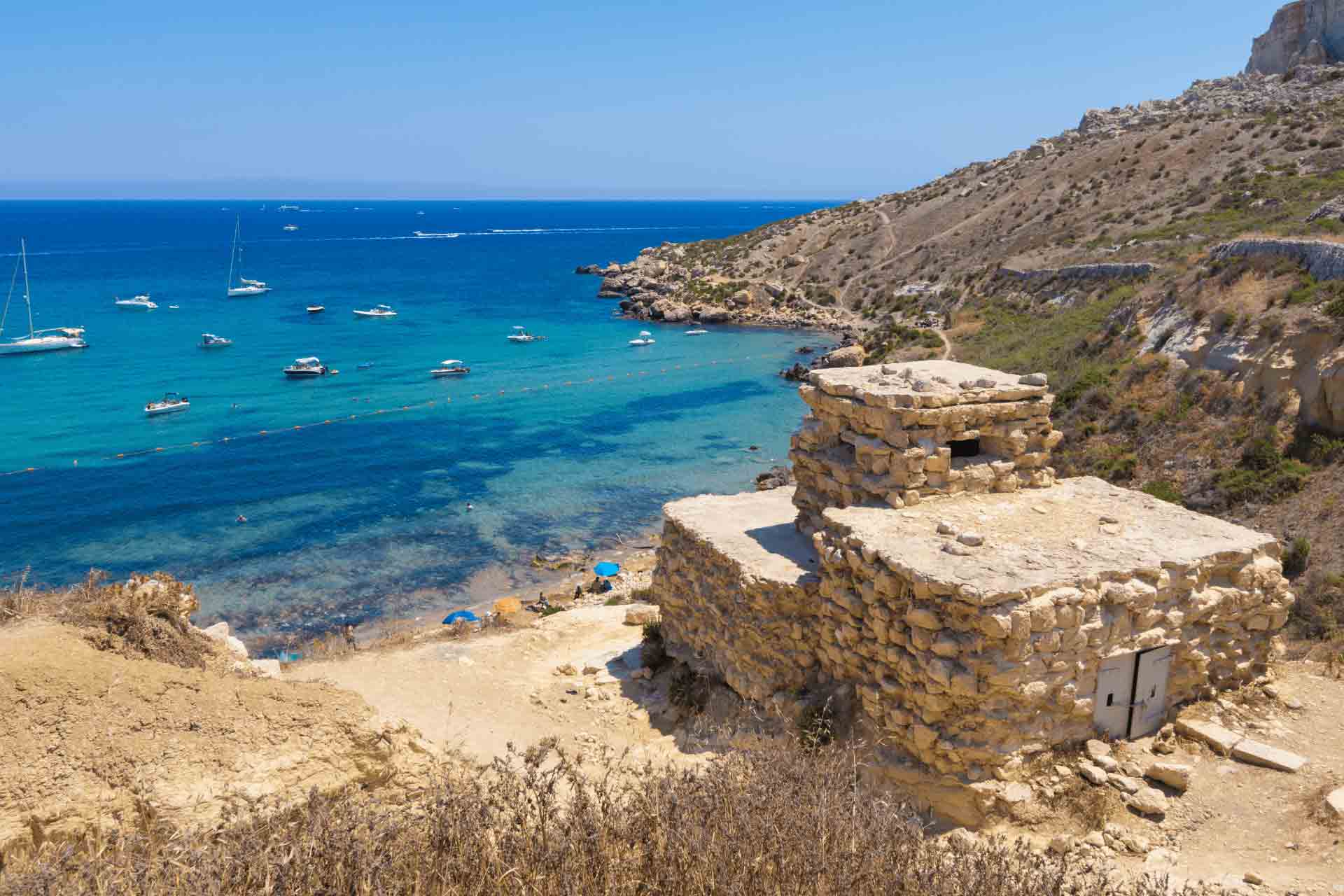 After about 30 minutes of walking, you will find yourself at an opening where a World War II pillbox still stands. This was one of the many pillboxes that were constructed around the island to keep watch for enemy attacks from the sea. It overlooks a lush shingled beach. Not many people frequent Imgiebah Beach so this is the perfect spot if you wish for some quiet swimming time. 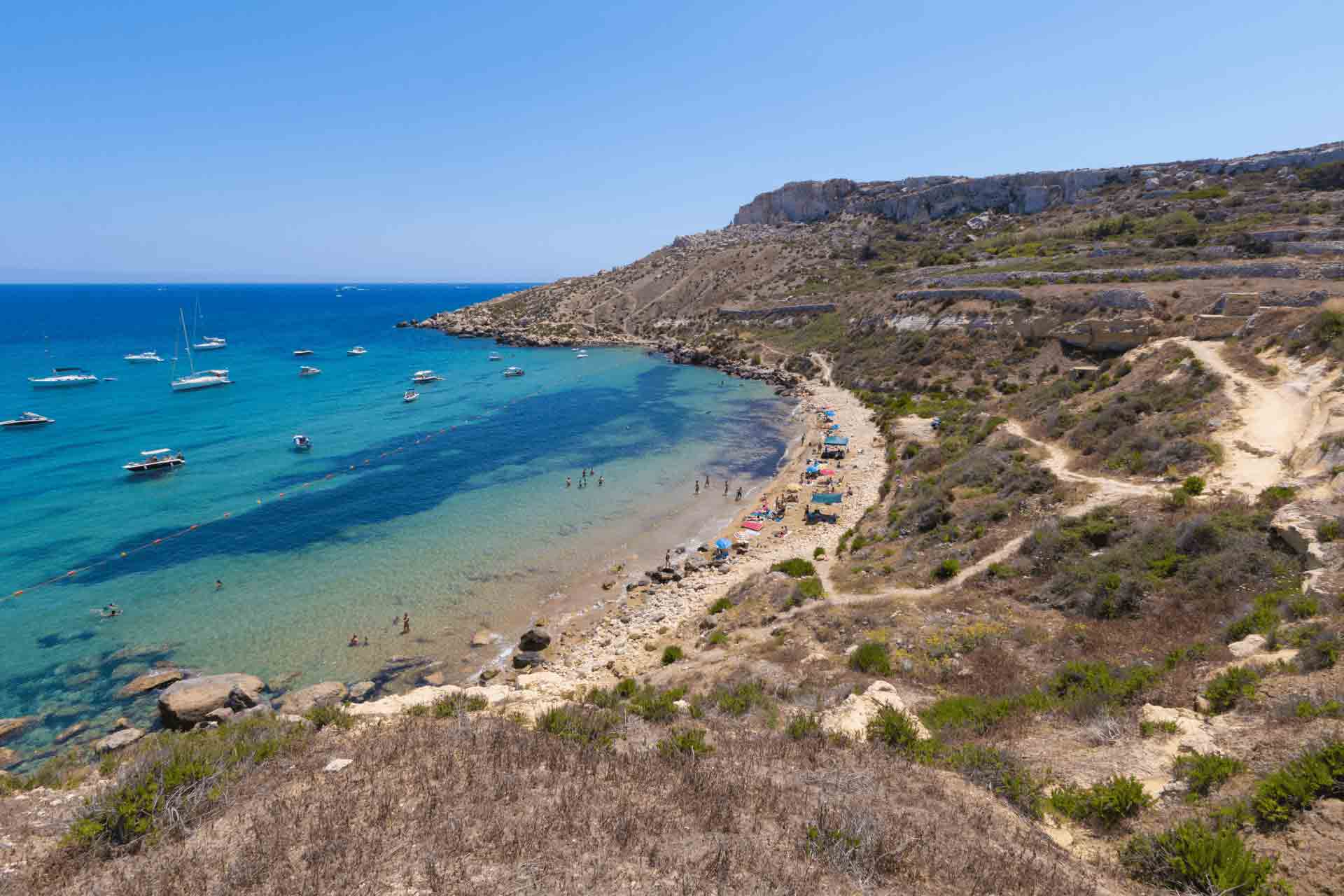 But if you're not looking to swim, you can always keep walking towards Ghajn Hadid Tower, which is the second destination you can reach from Selmun Palace.

So let's rewind a bit. You are back at Selmun Palace debating which road to take. Well if you are looking for a longer and slightly more challenging walk, going straight towards Ghajn Hadid Tower is your best option. 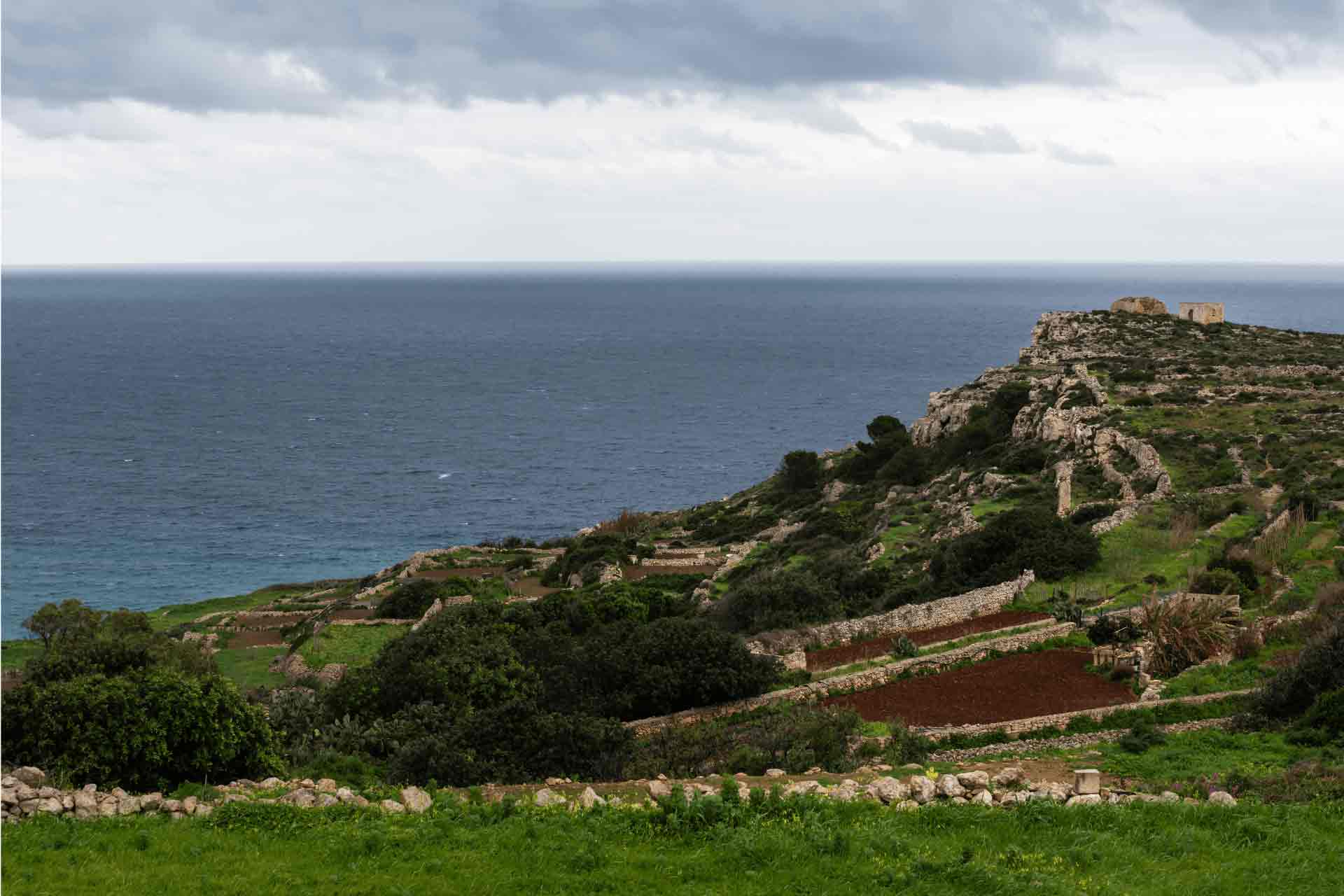 Much like the one leading to Imgiebah Beach, this road is quite easy to follow. Just use the shallow rubble walls as your guide and enjoy the peaceful stillness of the countryside that will make you dream of living in one of the traditional Maltese farmhouses found here.

Once you reach the end of the road you can choose to continue your walk or go for a dip. 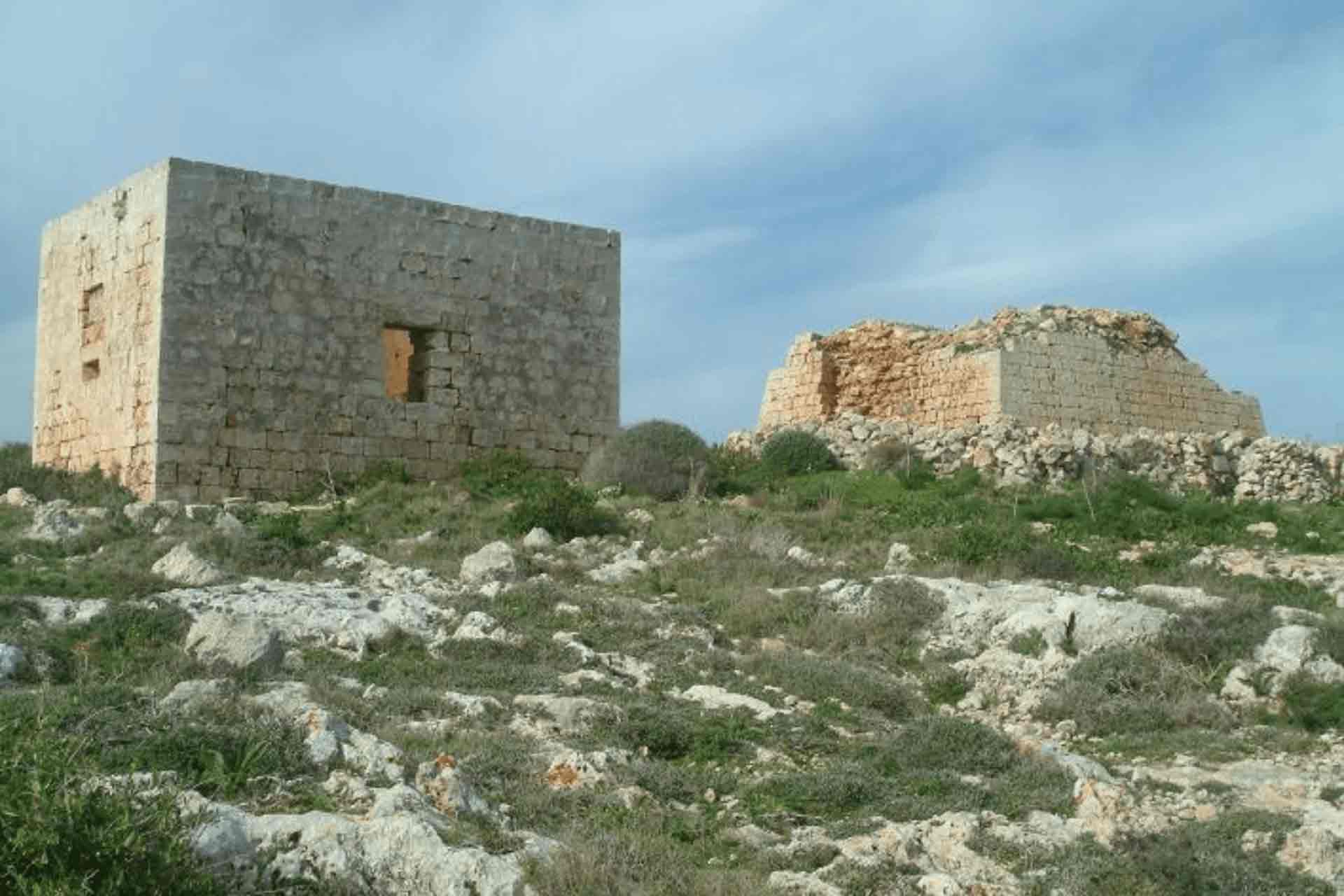 If you head to the left you'll arrive at Ghajn Hadid Tower, the first of the De Redin watchtowers built in 1658. Unfortunately, an earthquake in 1856 resulted in the collapse of the tower's top floor, and only rubble and an adjacent defensible room remain. 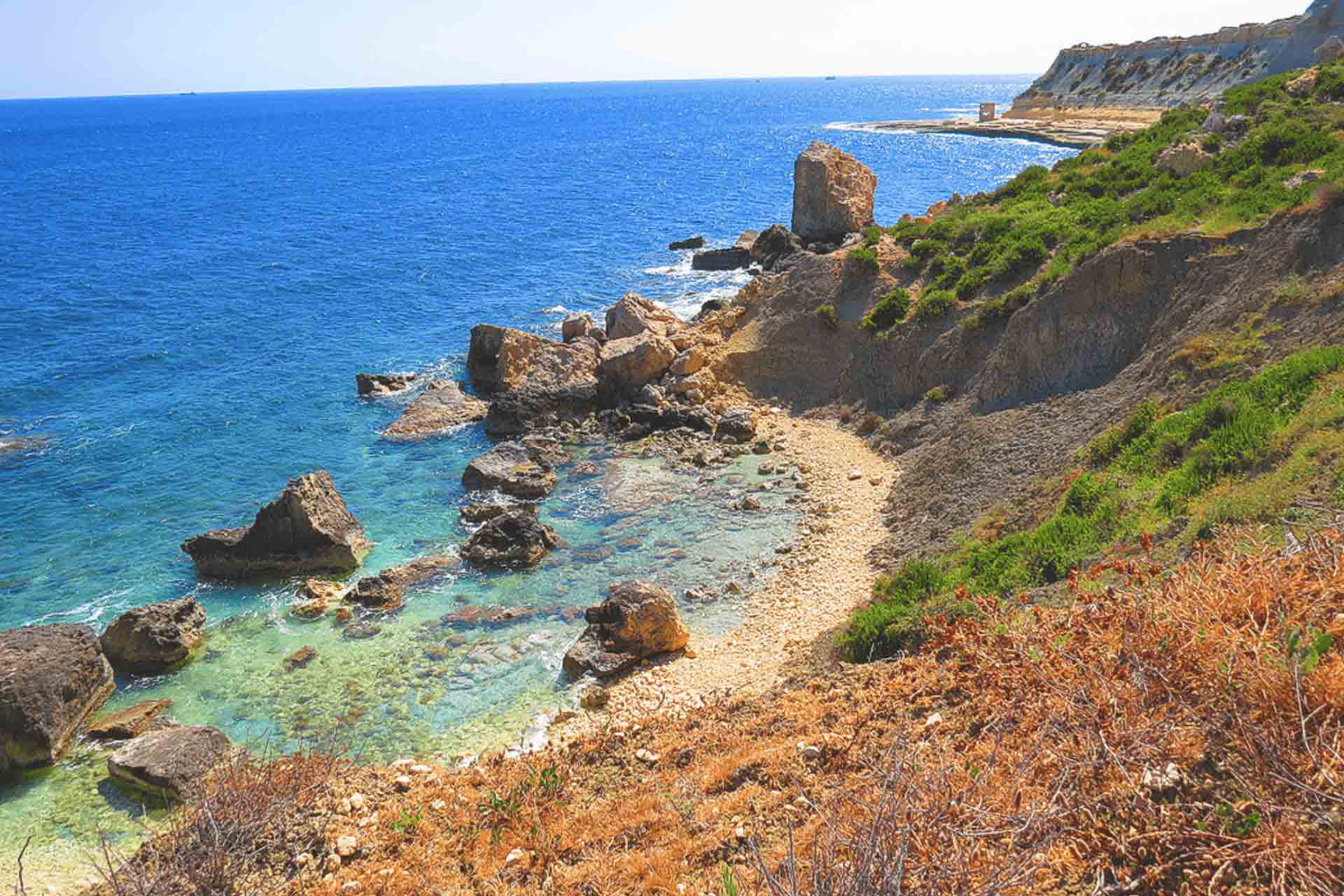 Alternatively, if you wish to cool off, you can follow the footpath on the right that will take you straight to a secluded beach known as Ghajn Hadid Beach.

Ok, back to Selmun Palace for one last time.

The final option is to go down the road on the right. This is probably the most exciting and history-packed path, but also the longest and most strenuous – but it's worth it, we promise! Just make sure you have a good pair of shoes on to make the most out of it.

Once again, all you need to do for the first part of the journey is follow the rubble-walled road until you get to what remains of Fort Campbell. This fortification is known for being the last major fortification built towards the end of British rule in Malta, in 1938. While we encourage you to explore its expansive grounds, we recommend that you avoid going into any of the rooms as they are structurally unstable due to the incessant acts of vandalism the fort has faced. 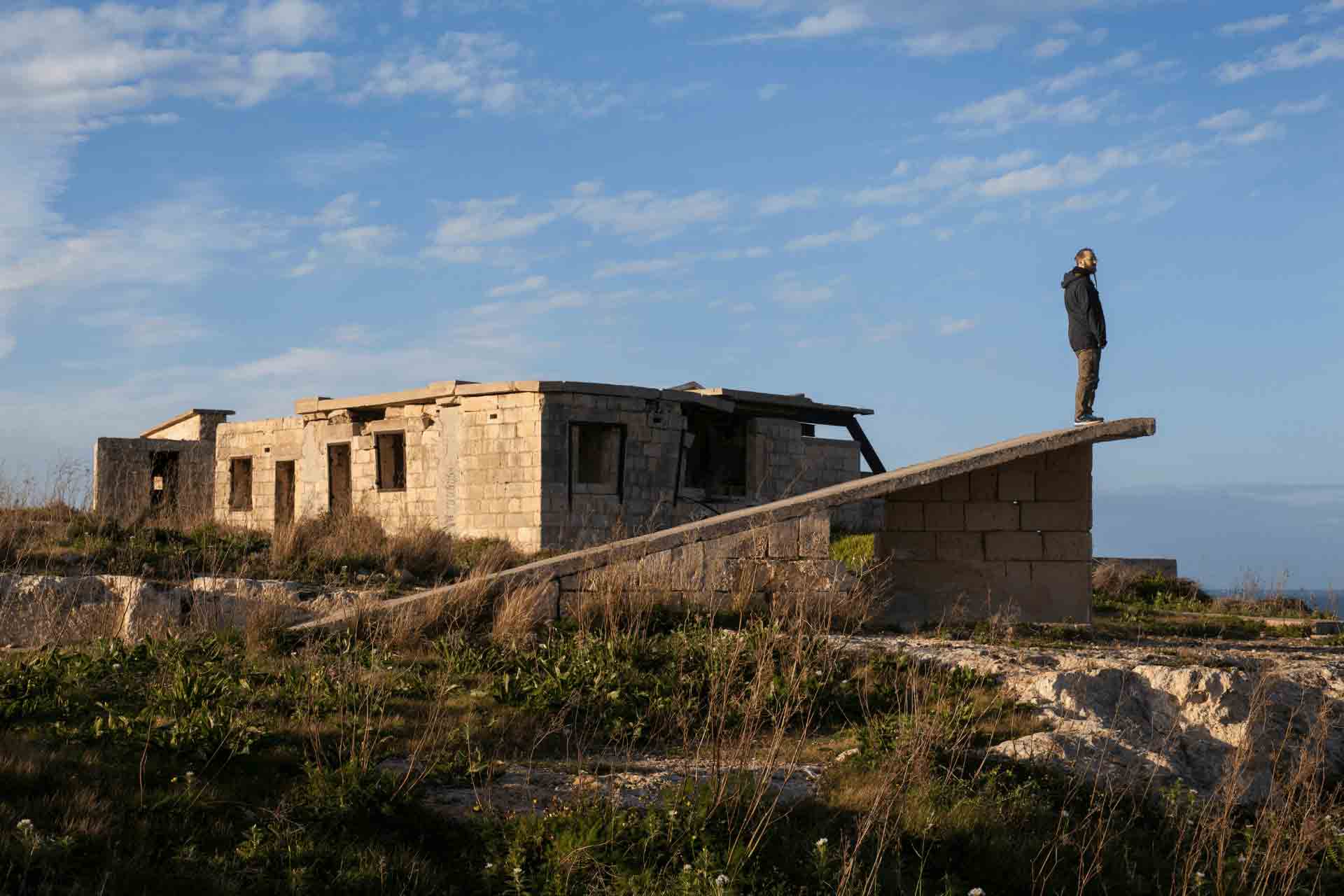 Some of the remains of Fort Campbell

From here you get great views of the entire Selmun coastline and St Paul's Islands. But if you want a closer look, you can set off down the winding roads beneath Fort Campbell and explore the many wonders that line the coast. 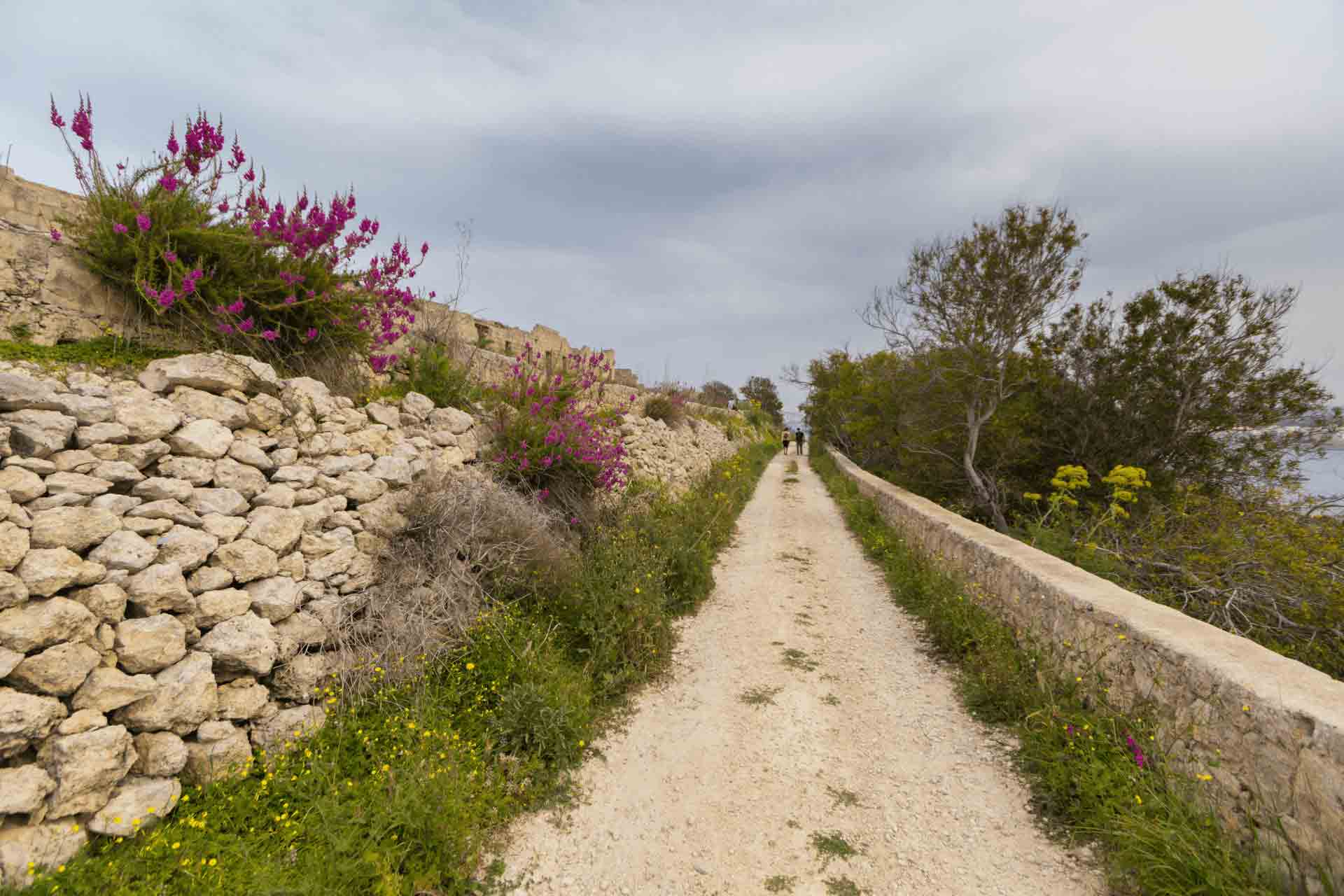 Walk down towards Mistra

You can choose to hike down to the right and head towards the Mistra Battery – a well-preserved artillery battery constructed by the Order of St John in the 1700s overlooking a gorgeous inlet known as Mistra Bay. 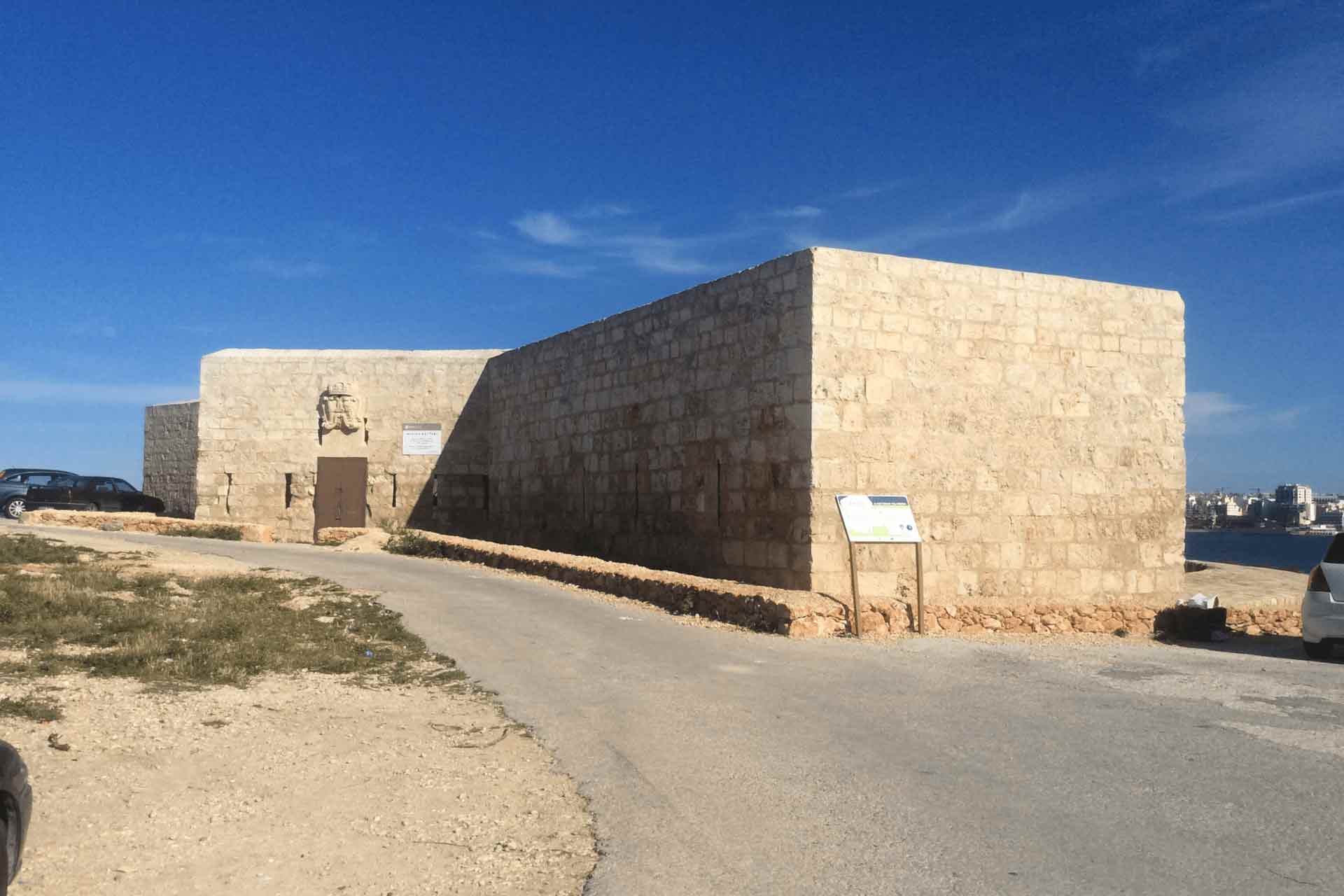 Otherwise, you can head left towards Il-Blata Il-Bajda, a beach littered with salt pans from which you can get a good view of St Paul's Statue on the islands opposite. 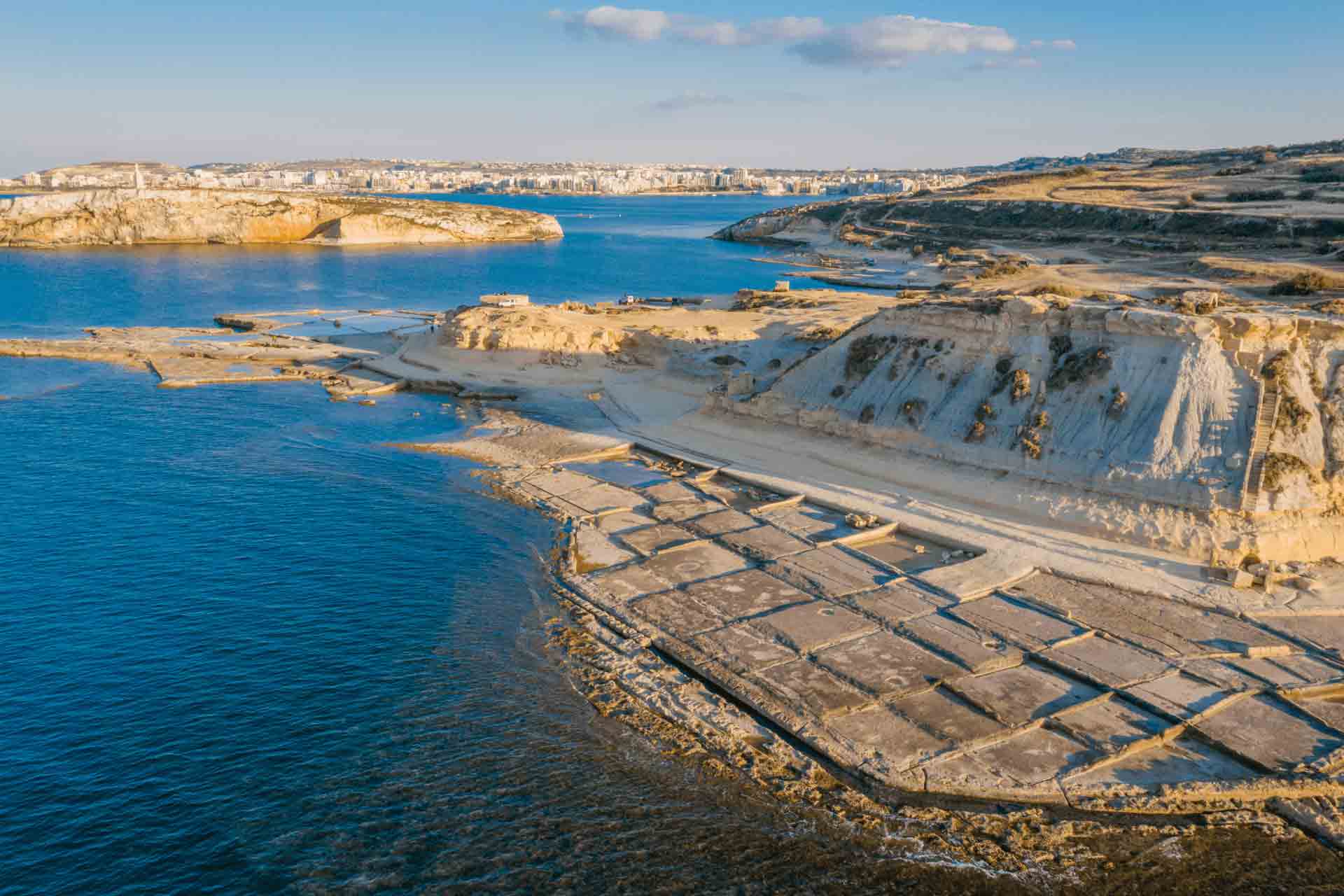 If you are using the bus, getting to Selmun Palace will require some 15 minutes of walking. You can hop on either the 41, 42 or 250 buses from Valletta or Cirkewwa and stop at the bus stop called Mellieha which is right next to a huge roundabout. Once there, walk down the road and take a left into Triq Selmun and just head straight. You'll know you're on the right track if you pass by Punic Tombs and the beautiful Baroque chapel – Selmun Chapel – along the way. 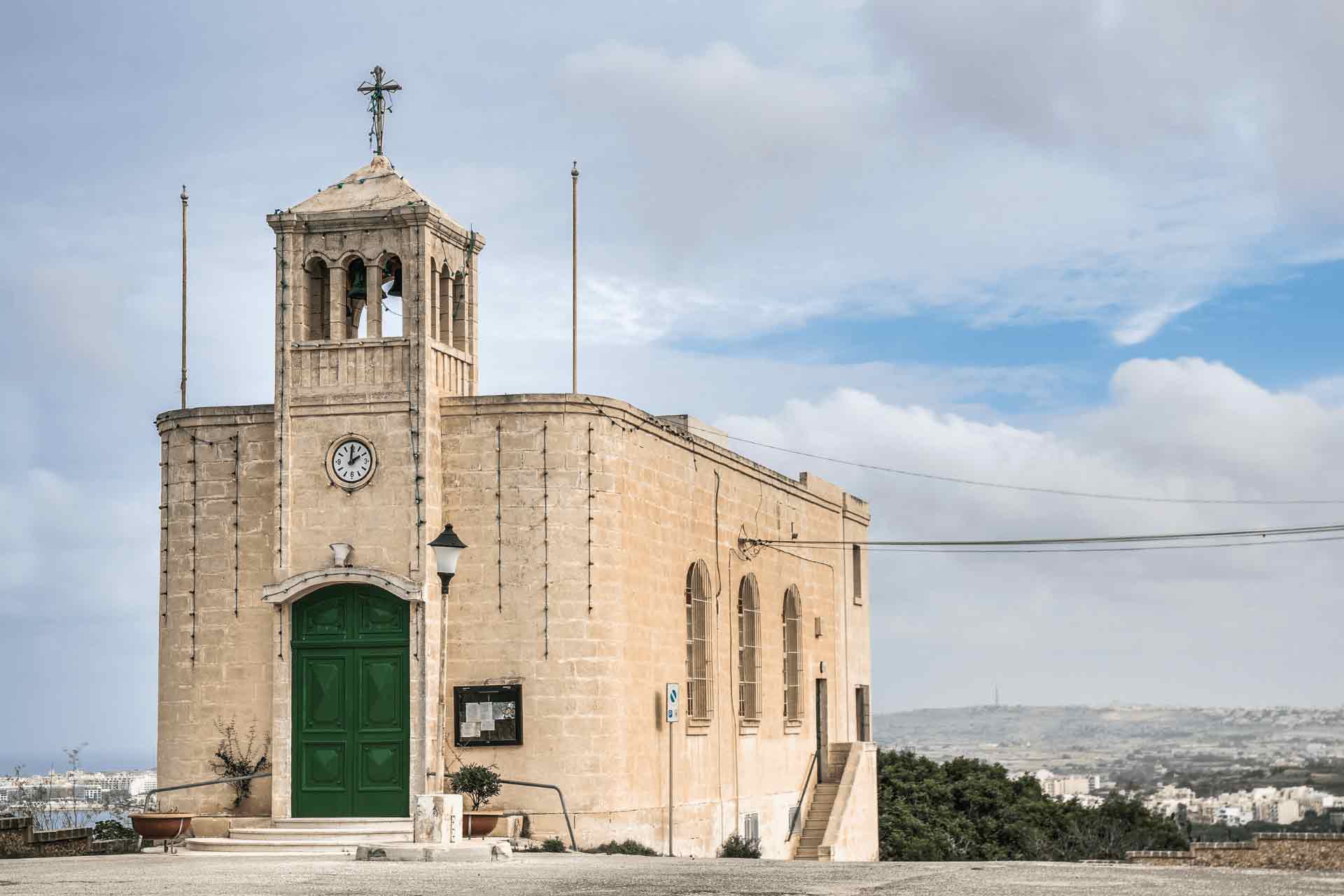 Otherwise, most cabs should take you straight to Selmun Palace.

For hiking, mid-season – between Summer and Autumn or between Winter and Spring – is always best as it's not too hot and there's a lower risk of rain.

This also applies if you plan to visit one of the beaches mentioned above; though bearing through the heat in the middle of Summer is well worth it too! Just avoid swimming when the wind is blowing in a western or southwestern direction.

For more helpful articles like this, visit our Activities tips section.