The 21st of September is a truly momentous day in Malta's history. It marks the end of an exhaustively long chronology of colonisation and the start of our island's own autonomous story.

On this day in 1964, Malta officially gained independence, becoming a recognised state with its very own constitution. It's mind-boggling to think that it has only been 58 years since then, though our fight for independence started centuries before that!

Malta's history is basically a recounting of the many empires that sought to take control of the Mediterranean and how our island's famous "strategic position at the heart of the Mediterranean" made it a prime target. In fact, this gave birth to its name picked by the first colonisers — the Phoenicians who seized control around 700BC — calling Maleth meaning 'shelter' since they used it as a safe trading port. 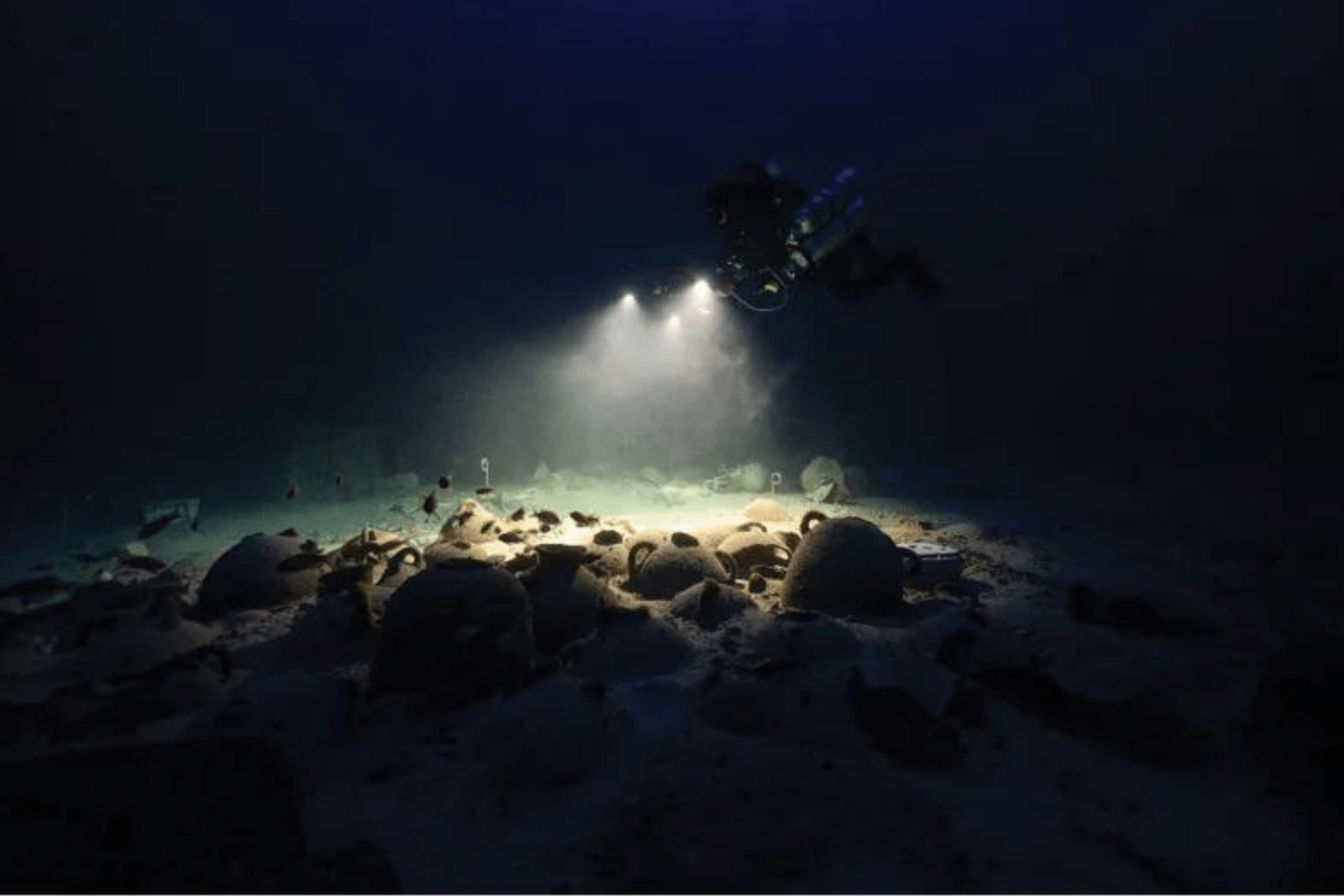 Remains of a Phoenician shipwreck discovered in 2007 a mile off of Gozo (source: The Past, photo credit: John Wood, University of Malta)

This is but one of the influences that have shaped Malta today. Our colourful colonial history characterises Malta's culture and its people — from the varied architectural structures that fill our cities to the Semitic and Romance influences in our mother tongue, to our Arabic facial and bodily features.

However, the most noticeable influences nowadays come as a result of our last coloniser, the British, like those red telephone boxes tourists hoard over for a picture or two.

A True Test of Strength

In 1800, Malta voluntarily fell under the hands of the British after they came to our rescue to flush out the French who were stripping our islands of all their worth. Thirteen years later Malta became an official British colony — the Crown Colony of Malta. Their rule lasted for almost two centuries which can be summarised as a neverending game of tug of war with the Maltese flag tied in the middle.

Malta served as a naval base for Britain and its allies which gave a substantial boost to the local economy. Yet, this made us heavily reliant on military expenditure which faltered when conflicts within the Mediterranean settled down. 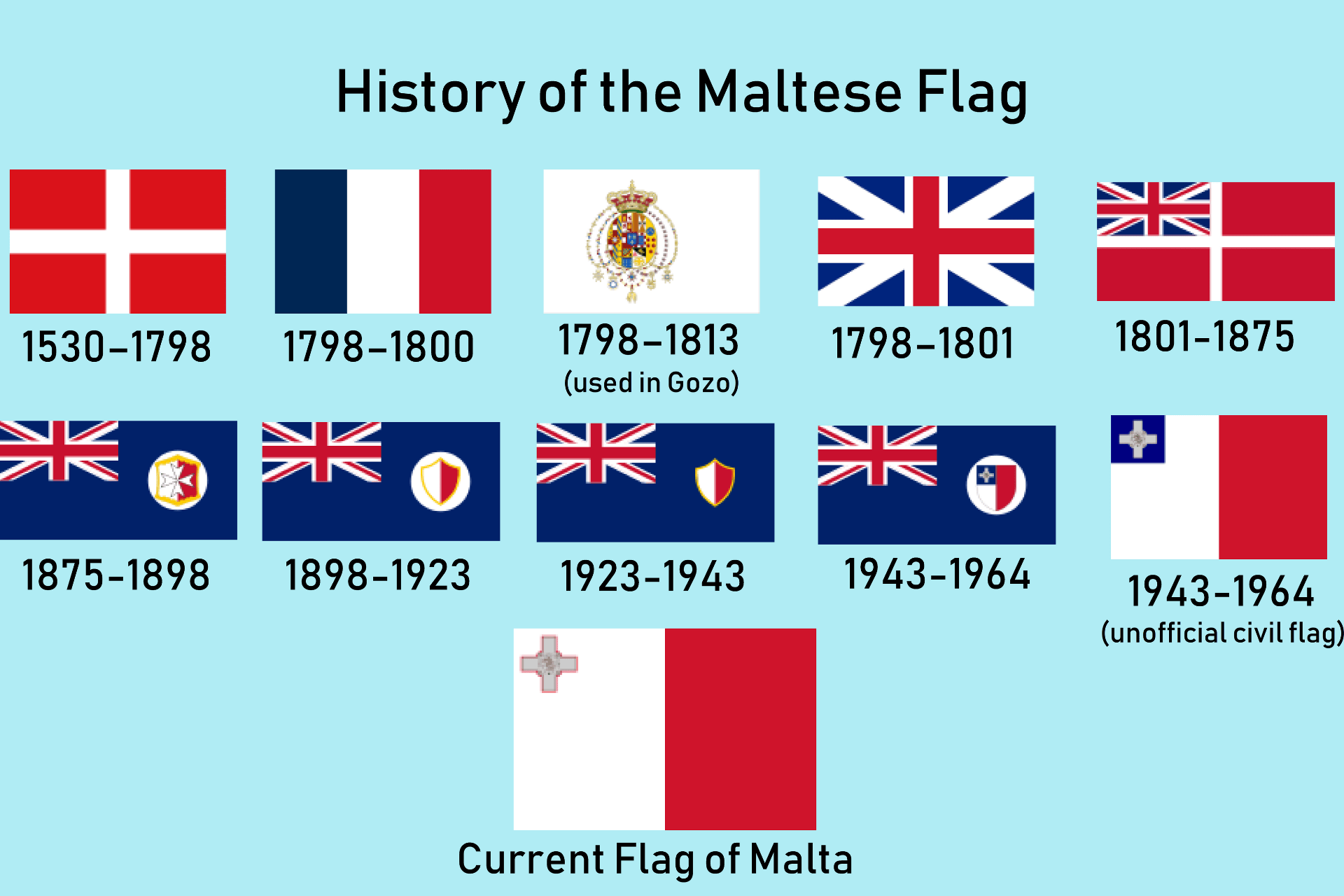 The Maltese flag through the ages (source: JLXuereb)

Such dependency caused frustration among the Maltese prompting them to seek home rule, but the British weren't going to loosen their grip that easily — that is until they messed with one of our most sacred celebrations, Carnival.

In 1846, the British Governer prohibited Carnival activities from taking place. Outraged, the Maltese carried on with their celebrations in protest, fighting anyone who tried to stand in their way. This act of bravery resulted in the conception of a Council of Governance under British rule five years later. In 1887, the council was entrusted with dual control, however, this shared governance was taken away again in 1903 which, of course, didn't go down well with the locals. 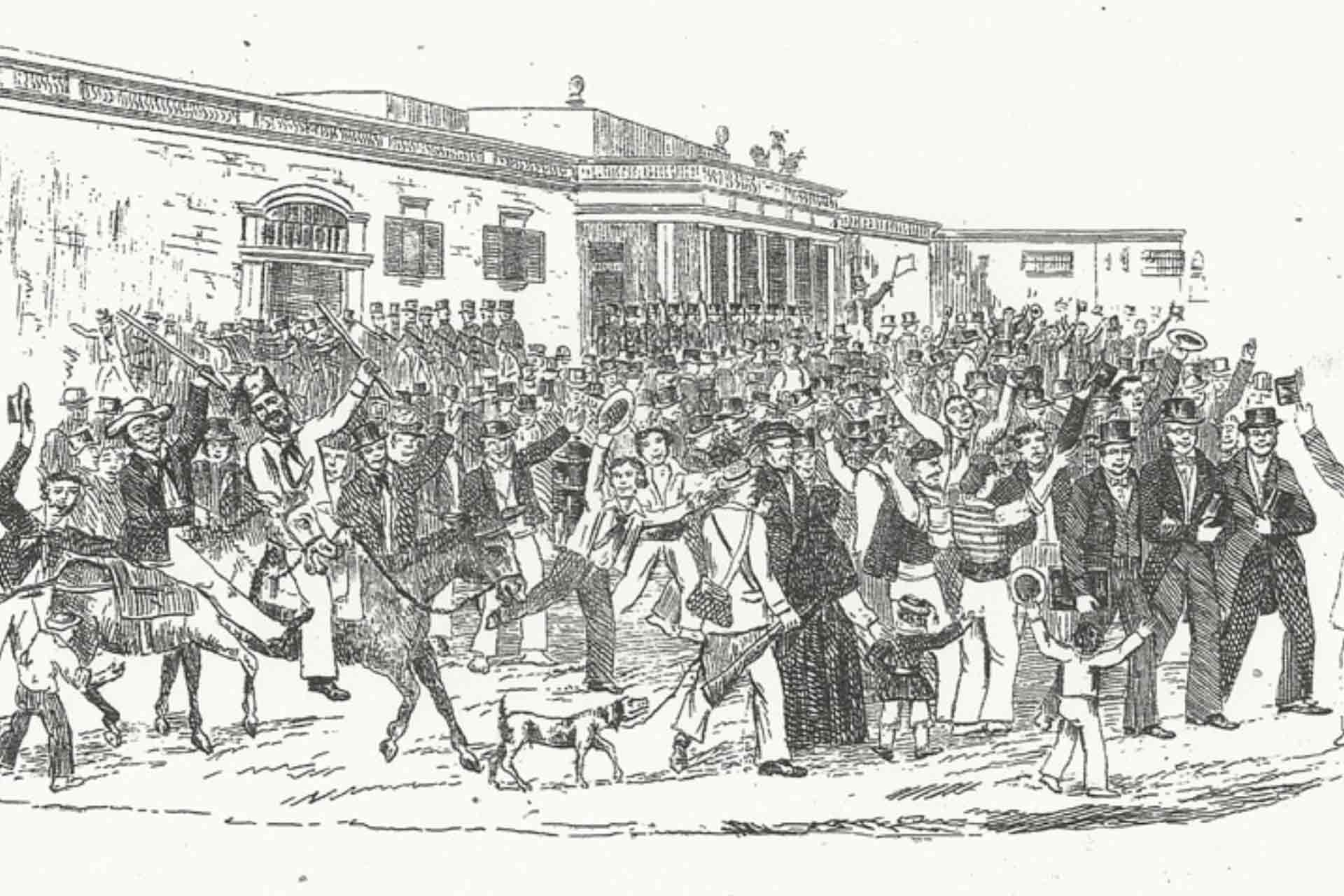 The straw that broke the Maltese's back came after the First World War when the cost of living skyrocketed and the majority of the population struggled to afford basic necessities like bread. The lack of attention and counteraction from the British government infuriated the locals and triggered rebellions.

In 1919, the National Assembly was formed, aimed at finding a solution. One of the resolutions tabled was independence from the British, inspired by the recent Paris Peace Conference. On the 7th of June of that same year, attendants of the national assembly stormed the streets of Valletta, revolting against British powers and propaganda in an event we famously know as Sette Giugno. 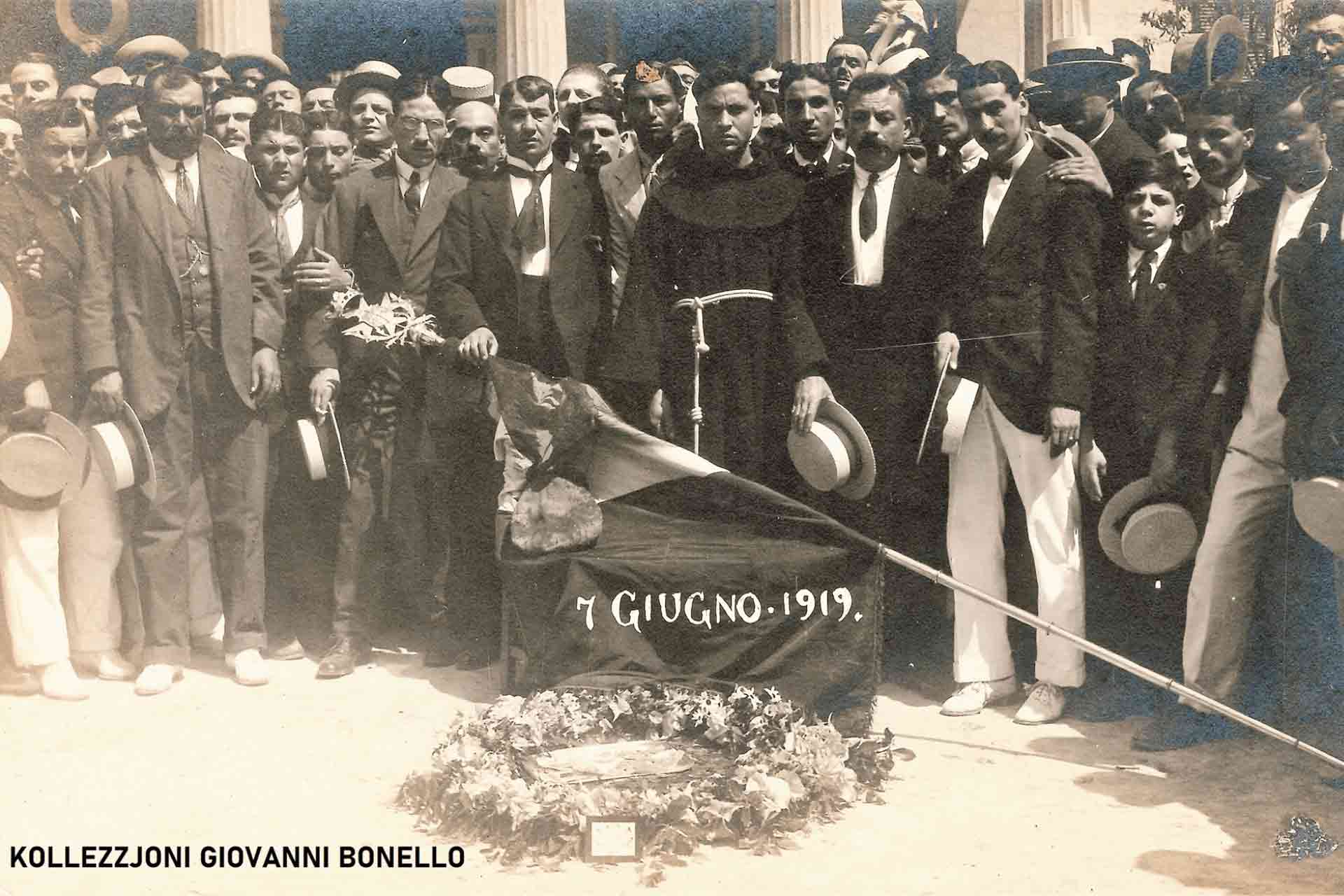 This momentous event marked the first major step in Malta gaining a sense of autonomy as it was granted self-governance under British rule in 1921. Here we saw the conception of a bicameral parliament and an elected legislative assembly with Joseph Howard serving as the first prime minister. But this constitution barely lasted a decade due to political unrest between the Maltese elite, the Church and British authorities. This caused Malta to lose all its privileges, reverting back to its Crown Colony status of 1813 and it wasn't until the late 1930s that it was allowed a partly elected Council of Government under British rule once again.

A few decades later, the Second World War broke out and Malta was relentlessly bombarded for housing the British naval fleet, but our island persevered through it all. This feat earned us the George Cross in 1942 and a promise from the British to give us independence though the process took a few decades to be fully realised. In 1947, Malta achieved self-rule and in 1955 a Maltese government was elected. 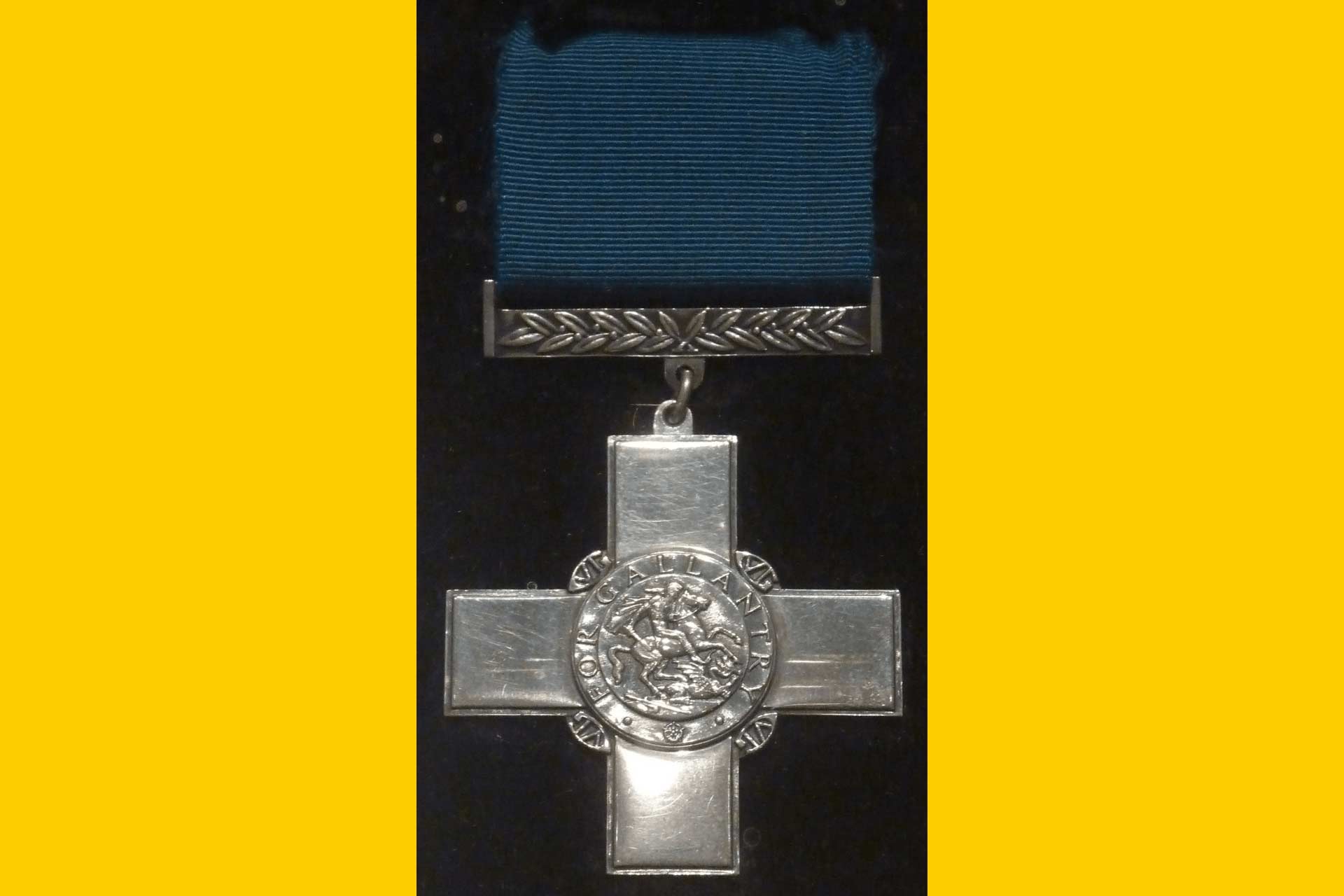 The George Cross given awarded by King George VI

However, tensions rose between the Maltese and British governments in the following years leading to the Maltese prime minister and his deputies to resign in protest in 1958. Two years later, the British government saw the need to reinstate a representative government in Malta and started working on a constitution, known as the Blood Constitution of 1961, for elections to take place.

Elections took place in 1962 with Dr Giorgio Borg Olivier taking the seat of prime minister of Malta and he was invited to form a government. In his speech recounting the years leading up to The Independence Constitution of 1964, author of the said constitution and then Attorney General John Joseph Cremona states that Borg Olivier accepted the offer under the condition that any issues with the Blood Constitution would be discussed and rectified, otherwise he'd resign. 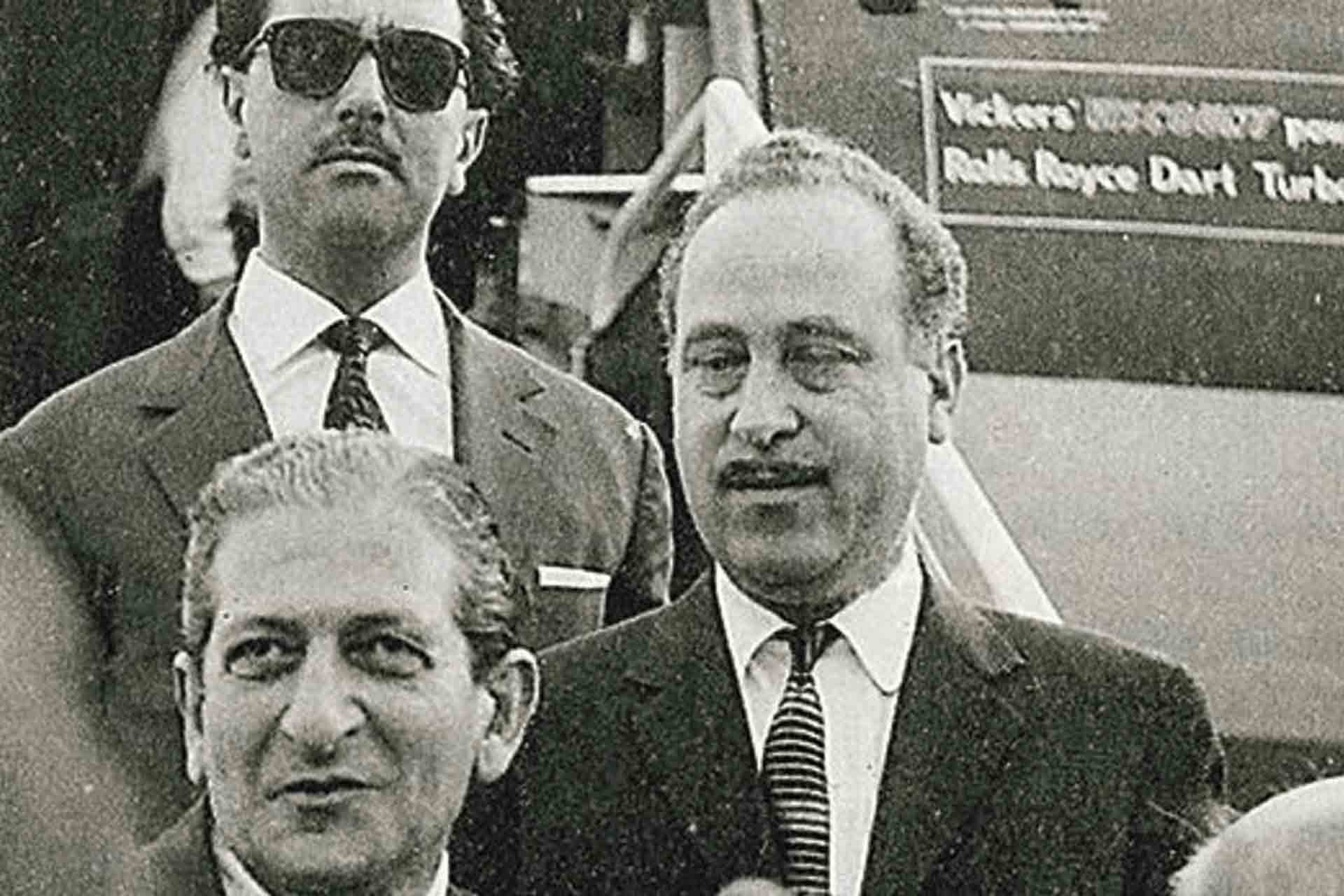 Talks in London were set up, but the Secretary of State Reginald Maulding was unwavering as he seemed to think that Borg Olivier's resignation was just bluff. Cremona pulled some strings through his legal connections and discussions restarted, but they were met with the same faith once again from both the new Secretary of State Duncan Sandys and the British government.

In light of these failed negotiations, Borg Olivier instructed Cremona to write a formal letter to ask the British government asking for Malta's independence. Sandys agreed to set up a meeting between both governments and asked Borg Olivier to present a draft of the Malta Independence Constitution. By 16 April 1963, Cremona had written up the draft, talks in London commenced just four months later and it got Sandys and the British government's approval soon after. A constitutional referendum was held in Malta between the 2nd and 4th of May 1964 and was approved through a majority vote. The Constitution came into effect officially on the 21st of September of that same year making Malta the 19th member of the British Commonwealth. 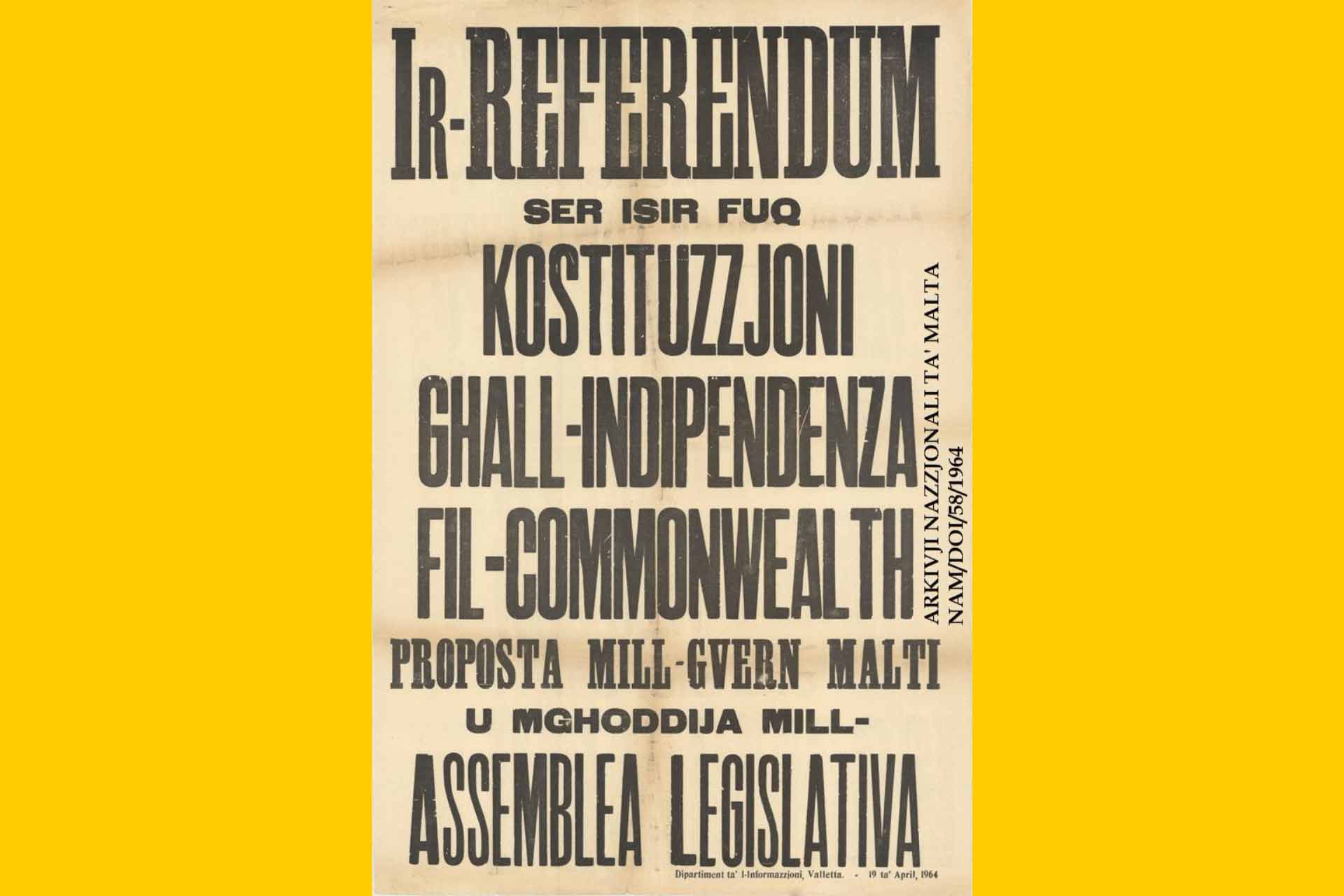 The day was marked by the arrival of Prince Philip on our island as a representative of Her Majesty Queen Elizabeth II. Crowds then flooded St George's Square in Valletta alongside parades of floats, including one representing the George Cross, while others procured their own demonstrations such as these inventive waterskiers; 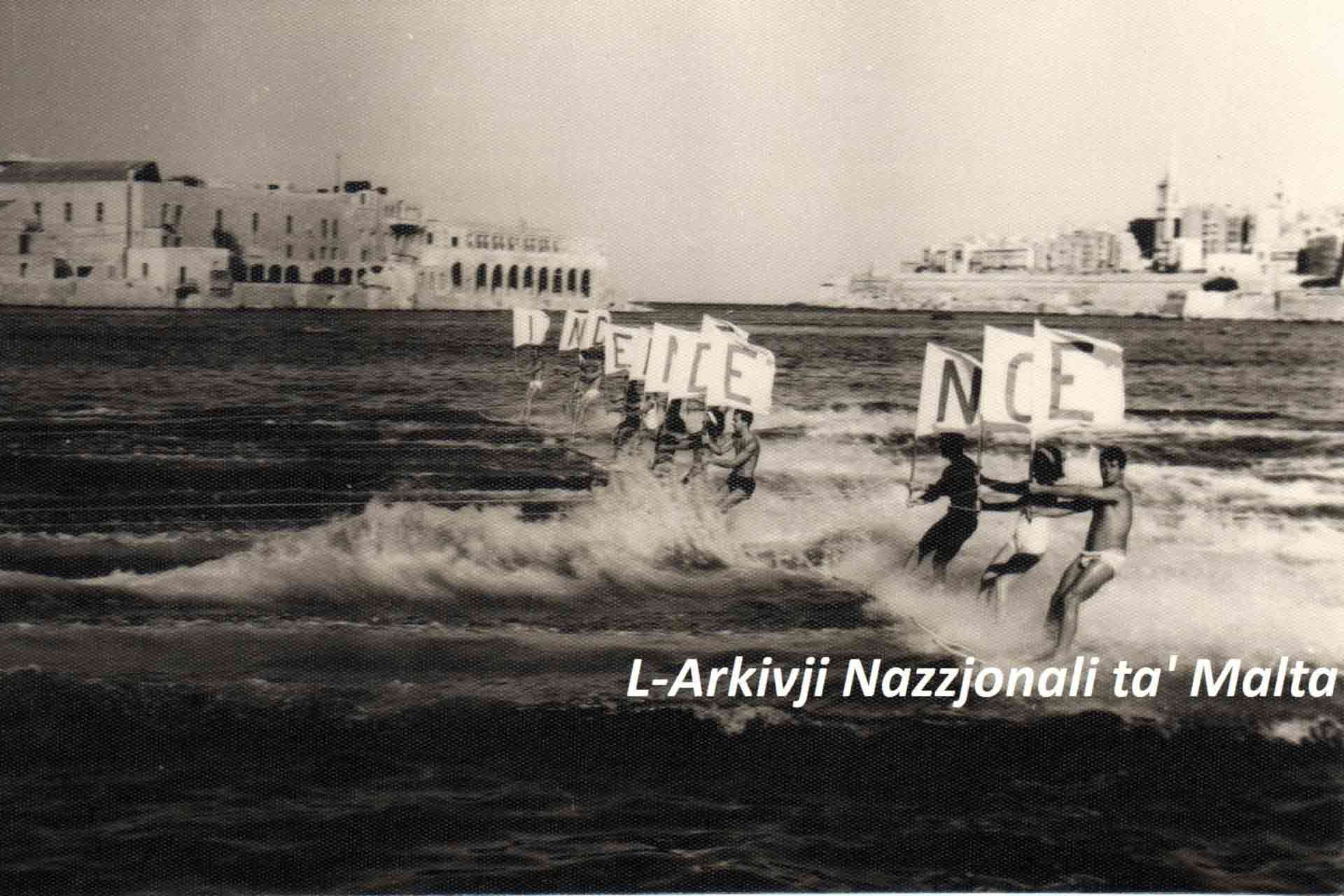 Maltese waterskiing during the 1964 Independence Day celebrations (source: The National Archives of Malta)

A ceremony was held later that day to welcome Malta as a free member state in the British Commonwealth by handing over the constitutional instruments to Prime Minister Dr Giorgio Borg Olivier. And just before midnight, the British flag that was hoisted in 1800 when they freed our islands from the French was replaced by the official flag of Independent Malta.

25 years later, a monument fashioned out of bronze and marble by Maltese sculptor Ganni Bonnici was inaugurated at the entrance of the Floriana mall. It features a woman holding the Maltese flag as she walks over abstracted bands representing the ties that once held us down. On the same anniversary, the Central Bank issued a set of two Maltese Lira coins — a silver Lm2 and a gold Lm100 — bearing the portrait of Dr Giorgio Borg Olivier in celebration of the economic improvements that Malta's independence brought forth. 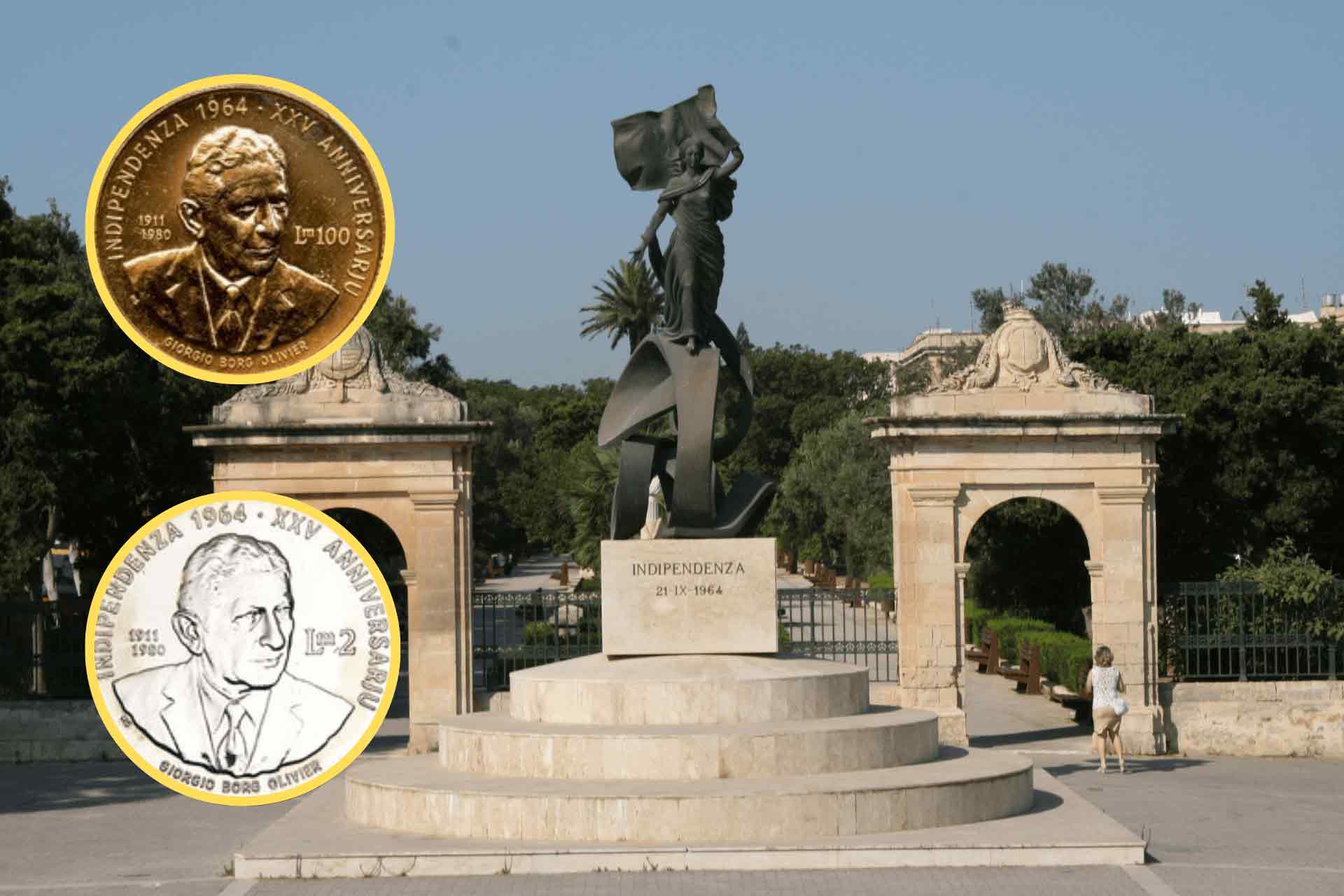 Nowadays, locals celebrate Independence Day by doing what Maltese do best — eating, drinking and fireworks! Numerous villages across Malta and Gozo take it upon themselves to set off an explosive light show at night, with the most attended event being the one in Valletta following a ceremony and a parade across the capital's streets. But there are also other ways that you can make the most out of this public holiday if fireworks aren't really your thing!

For more articles on the events that shaped the Maltese Islands, visit our Culture page.