Catacombs, Windmills and Baroque Chapels: The Rich History of Zurrieq

Lush countryside, quaint buildings and scenic views — Zurrieq is one of Malta's oldest and most treasured towns with a history that spans back to the Bronze Age. This southern seaside gem finds its etymological origins buried deep in our country's Semitic roots, with its name deriving from the Maltese word izraq (azure in English) a deep, vibrant and clear blue.

The origin of this name is unclear, as some claim that it's a reference to the cerulean Blue Grotto seas, or it may even have a connection to the Town's motto 'Sic a Cyaneo Aequore Vocor' (From the blue sea I took my name). Others claim that Zurrieq's name is derived from zoroq, the plural of izraq – an eye colour that is remarkably typical amongst the town's inhabitants.

Historically, Zurrieq was more or less always inhabited by a fairly substantial population, with historical discoveries revealing that it was occupied during the Bronze Age (2350 BC - 700 BC), making it one of the oldest towns in Malta.

The village was subsequently occupied by the Phoenicians and Carthaginians, who utilised the islands during the early 8th Century BC as their Mediterranean-based trade outpost. Historical remains left behind by these past conquerors can be found in Zurrieq, such as the Punic building, possibly a tower, that was over time incorporated into several properties, including the Domus Curialis (Dar l'Arcipriet).

This tower is one of the most significant surviving examples of Punic architecture in Malta. It consists of a well-preserved 18-foot high tower crowned with archaic Egyptian-inspired embellished cornices. While the tower's purpose is not known, it has been speculated that it may have been a temple devoted to Melqart, the tutelary deity of the Phoenician city, Tyre – this premise comes from Claudius Ptolemy's geographical writings.

While it was for a while believed to be a defensive tower, further examination of the Zurrieq Punic Tower shows that it was not so, as the building's topology differs from that of Punic-Roman defensive towers scattered around the island.

Other historically significant buildings in Zurrieq include a road which passed through the village in an effort to link it with the northwest and southern sides of the island. This means that Zurrieq was of economical and commercial importance at the time.

Roman remains in Zurrieq include the Tal-Baqqari tower ruins, constructed using the same type of stones utilised to build the unearthed Tal-Bakkari chapel – built using repurposed stones from the Roman temple which predated it. Other ruins in the area include double edifices from pre-Christian shrines.

First Documented In The 14th Century

The first written historical reference to Zurrieq was made in 1399, when resident Simon Sciriha and his wife, demanded the return of a vineyard in Zurrieq from King Martin of Aragon. However, it was first documented as a parish back in 1436, along with ten additional towns. Zurrieq at the time was not as we know it today. Areas like Hal Lew, Hal Millieri, Bubaqra, Nigret, Qrendi and Hal Manin were part of the village – with Qrendi becoming a townlet of its right in 1618 along with other hamlets which ultimately followed course.

Other regions' parameters were liquefied and became amalgamated with Zurrieq or neighbouring towns.

There are numerous wondrous chapels and churches in Zurrieq, with the most noteworthy one being the Annunzjata of Hal Millieri. This medieval structure was built back in 1419, and it's a typical example of a Maltese medieval chapel. This Sicolo-Norman chapel contains frescoes and murals which are noted to be unique in the Maltese islands. 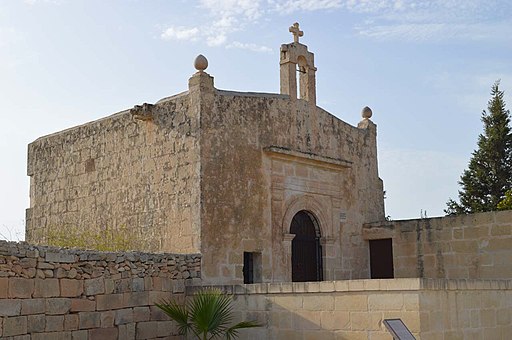 The Zurrieq Parish church, dedicated to St Catherine, is a baroque beauty built between 1634 and 1659 on architect Lorenzo Gafa's plans. The Matrix Parish Church of St Catherine of Alexandria houses six astounding paintings by Mattia Preti.

Additional substantial buildings in Zurrieq include the Armoury constructed during the 16th century – it is said that Napoleon Bonaparte spent a night at this palace during his visit to the village. Throughout the Second World War, the Zurrieq Armoury was used by the British Armed Forces to station the Hampshire Regiment.

Zurrieq is also home to one of the thirteen coastal towers built by Grand Master de Redin in 1659 designed to guard the island's coast against invading forces.

The Nigret Palace and its captivating baroque chapel dedicated to the Immaculate Conception were built in 1715. Nowadays this palace doubles as a convent and an orphanage run by the Sisters of the Sacred Heart.

Zurrieq is famous for its windmills, such as tal-Qaret in Nigret, which was constructed by Grandmaster Nicolo Cottoner in 1674, and ta' Marmara (1724), named after the first person to operate it – Luret Marmara.

The most prominent windmill in Zurrieq, is, of course, the Xarolla. This 18th-century building is one of the most well-preserved of its kind on the island. The Xarolla is located within a complex of historical importance that includes a farmhouse, a chapel, and late Roman catacombs retaining a column adorned with leaf-shaped motifs resting on a fluted base. In this underground complex, one can find headrests, burial niches and window tombs. The Xarolla windmill was restored to its original working order in 1992 and is the only functioning windmill in Malta.

Exploring the historically rich town of Zurrieq and the hamlets surrounding it is a fabulous way to discover more about our heritage and culture. Whether you're looking for a mind-clearing stroll in the dense valley of Wied Babu or an exploration of the multiple chapels in the area, a day in this tranquil town will surely present you with a rich and nourishing experience.

Click here to uncover more about the remarkable Maltese culture