Fireworks, Marches & Saints: The Many Wonders Of The Maltese Festa

If you've been to the Maltese Islands before, especially during the summer months, you're probably aware that we love to celebrate – and there's no celebration that we look forward to more than that of our village's patron saint (or saints)!

Starting as early as May up until September, villages across Malta and Gozo erupt in spirited street parties, showstopping pyrotechnics and marching bands. In this article, we'll be walking you through the history behind these festi, what to expect and when you can experience them for yourself.

From Religious Ceremonies To Outdoor Feasts

If you ask any local about their village festa, they'll probably start off by telling you that theirs is the best and go on to mention the raging street parties, passionate parades and lots and lots of food and drinks. Such celebrations are a far stretch from their sacred beginnings where everything took place within the confines of the church. 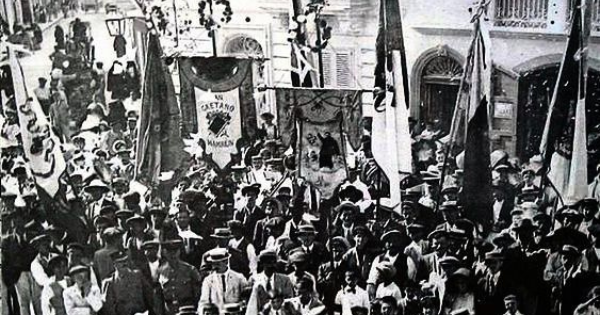 In the beginning, when Roman Catholicism started becoming the predominant religion on our islands, Catholic feasts weren't really a thing at all. Instead during the three days leading up to the festa, the churches hosted sermons during which psalms would be played by the village band. Then, on the last day, the statue of the patron saint would be carried around the church to the sound of the patron's hymn. An official hour-long mass would be held on the official day of the festa known as the panegyric.

It was not until the late 16th century when our islands were under the Knights of St John's rule, that village feasts in Malta and Gozo moved outside the church. It is believed that Grandmaster De Rohan, the ruler between 1775 and 1797, was a lover of feasts so he incentivised the Maltese to expand their festivities outside of the church with food, music and dance.

Much like their humble beginnings, village feasts in Malta and Gozo last three days – typically starting on Friday with the official patron saint day landing on the following Sunday. Having said that, preparations start way beforehand as churches are lit up in colourful lighting and while banners, papier-mâché statues and festoons adorn the village centre. 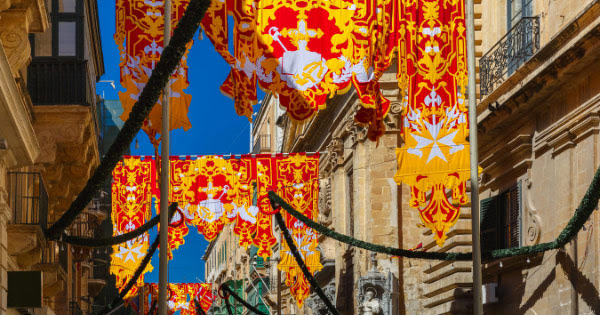 The pavaljun; intricately designed valances set up weeks before the feast to mark its arrival

At the same time, pyrotechnics and band companies start going door to door collecting money to fund their activities as people decorate their homes in the village patron's colours. Weeks prior to the official celebration, you'll see rooftops and facades decorated with flags, festoons or lights – or all three. In some localities, houses might put up different colours due to the village having more than one patron saint which is the cause of much friendly rivalry. In such cases, each patron saint has a dedicated colour, pyrotechnic company, band and fan base, and each side tries to outperform the other with show-stopping fireworks and unforgettable marches. 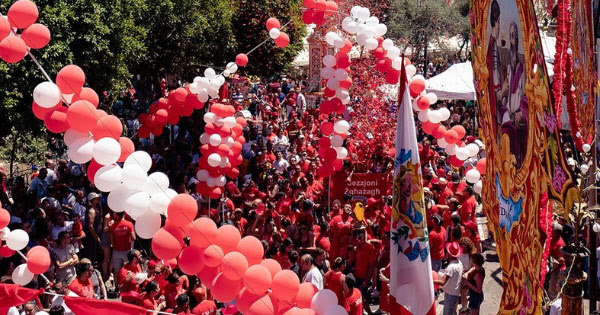 The marches are probably the largest, loudest and most anticipated events which usually take place on Friday evening and Sunday morning. In some villages, marches are also celebrated on Sunday evening following a religious procession where the statue of the patron saint is carried around the village accompanied by a brass band.

People dressed up in their patron's colour flood the village centre and main streets, probably with a drink or two in hand and marching behind the band while chanting their patron's hymns at the top of their lungs. In most villages, you'll even find residents who live in the streets where it passes through throwing paper confetti and balloons from their balconies!

Aside from all the parties, there are also some activities for all the family to enjoy. Throughout the days leading up to the feast, the village centre is filled with food stalls selling all kinds of delicacies, fast food and sweet delights such as the traditional Maltese nougat. You'll even find some stalls selling toys for the little ones – be prepared for lots of stink bombs and rocket poppers! 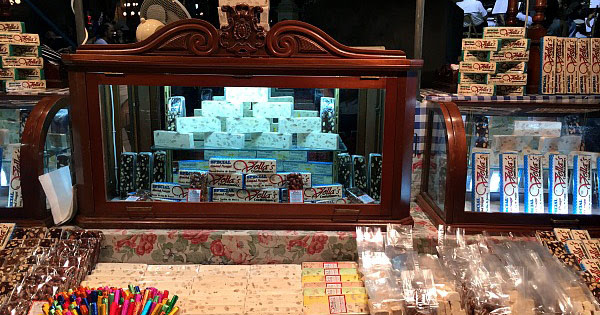 On Saturday, most families take this time to clean up their homes, put on their best wears and host banquets where they invite friends and family to celebrate before heading to the village centre to attend mass or watch some spectacular pyrotechnics. It all starts with a fireworks display that lasts for an hour or two with the musketterija (also known as il-kaxxa) marking the end of the show where small explosives are fired in quick succession. This is followed by the giggifogu – a vibrant light show of ground-based fireworks with various designs and mechanical moving parts powered by the force emitted from the fireworks resulting in the incredible explosion of colour you see below: 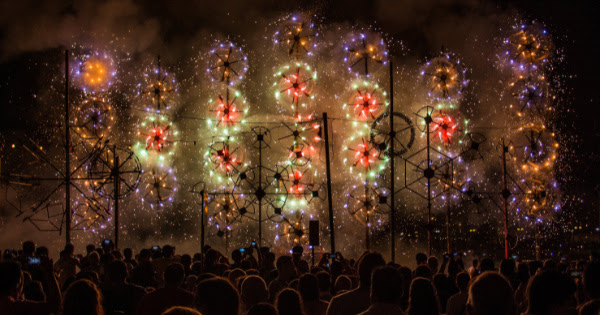 When To Experience It

As previously mentioned, most village feasts in Malta and Gozo take place between May and September with a total of 60 feasts taking place in Malta and 10 in Gozo.

You can find the full programme for this year's festi on Malta Info Guide.

Now, while every festa has its own charm, we'd be lying if we said there aren't some which are more popular among locals than others due to the size of the village itself which allows more room for grandiose festivities.

The most well-known feast is surely the feast of The Assumption of Our Lady on the 15th of August which is marked by a public holiday. While this is celebrated in nine localities in Malta and Gozo the one in Mosta is the one to attend. 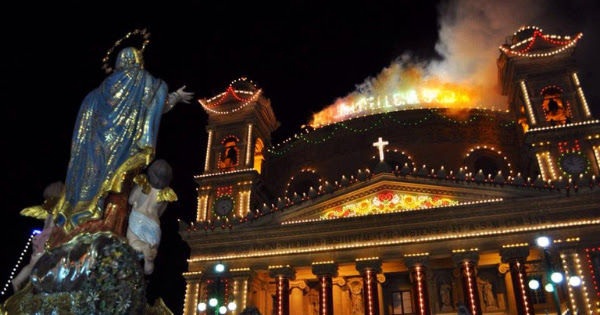 The Assumption of the Lady feast in Mosta, 2015 (source: Festa Santa Marija Mosta)

Some other local favourites to look out for include the village feasts of Hal Qormi, Hamrun and Zurrieq which are considered to be the most intense, loud and vibrant festi on the Maltese Islands.

So, if you're looking to get a real taste of Maltese culture, plan a trip to one of our festi. Just avoid wearing open-toed shoes, dress in the correct patron colour – or else… no seriously, we mean it – and book a cab because parking is a hassle and you probably you'll be in no state to drive back home!

For more articles on Maltese culture and traditions visit our Culture section!